THUWAL(SA), September 2021 — The creation of cellular structures similar to blastocysts has enabled King Abdullah University of Science & Technology (KAUST) scientists to build an in vitro model that mimics the earliest moments of human embryogenesis.

A blastocyst is the first structure to develop during embryogenesis in mammals. Formed about five days after fertilization and prior to implantation in the womb, blastocysts contain the first three cell lineages of the embryo, which are vital for healthy development and organ formation. Ethical concerns severely constrain the use of human blastocysts to investigate embryo development, which has led to limited understanding of human embryogenesis and its links to developmental defects.

“To address this considerable knowledge gap, there is a pressing need for an effective model that avoids the ethical issue of destroying human embryos,” said Ph.D. student Samhan Alsolami, who worked on the study under the supervision of KAUST’s Mo Li, Ph.D., and with co-workers across China.

The only way to create blastoids — blastocyst-like structures — is to use extended pluripotent stem cells (EPS cells). EPS cells have a higher developmental potential than conventional human embryonic stem cells and can become both extra-embryonic cell lineages (the placenta, for example) and form the embryo itself. The team first needed to grow the trophectoderm, an extra-embryonic lineage that surrounds the embryo.

“The trophectoderm is then combined with EPS cells in a three-dimensional culture,” said Alsolami. “After about five days, the EPS-blastoids self-assemble, forming a cellular structure close in form and function to a human blastocyst.”

Initial investigations suggested that the EPS-blastoids were similar in terms of their cellular make-up and transcriptome to human embryos that were cultured for around six to 10 days. This two-step protocol, while promising, is still quite inefficient, and the team are now optimizing it.

Their new model, together with other recently established models, will provide insights into human embryogenesis and allow scientists to study disorders such as infertility.

“Our work shows that it’s possible to circumvent ethical issues and construct a faithful model of early human embryogenesis purely from stem cells,” said Dr. Li. “Future research based on our model could potentially inform regenerative medicine, too.”

“These structures will help us probe the development of human organs and multiple other processes,” added Yang Yu, Ph.D., at Peking University Third Hospital, Beijing, who co-led the study. “This could facilitate the generation of cells or tissues solely from stem cells to replace lost or damaged tissues.” 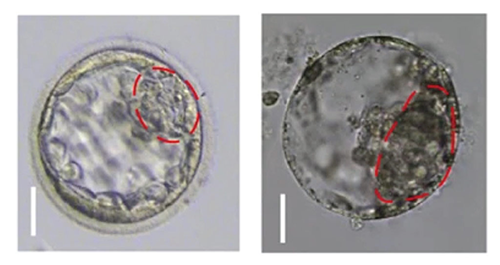 A natural human embryo (left) and a human blastoid made from stem cells (right). Image courtesy of © 2021 KAUST; Zheying Min.