Cerebral adrenoleukodystrophy (CALD), characterized by imaging findings of demyelination, inflammation, and contrast enhancement on magnetic resonance imaging, suffers from a lack of accepted therapies for patients with advanced forms of the disease. In a recent STEM CELLS Translational Medicine article, researchers led by Troy Lund (University of Minnesota, USA) report on their attempts to deliver mesenchymal stem cells (MSCs) via the intrathecal route in two boys with rapidly advancing CALD in hopes of utilizing their anti‐inflammatory ability to halt disease progression. Gupta et al. noted the feasibility and ease of this administration route; however, subsequent follow‐up showed progressive demyelination in both patients, perhaps due to the advanced nature of the disease in the patients or an inadequate cell dose. 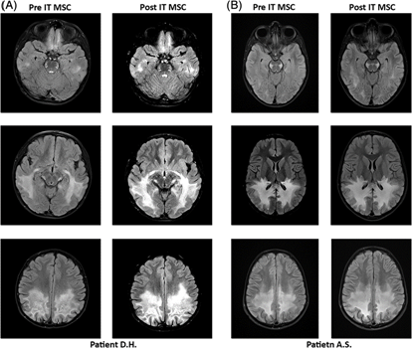