SAN DIEGO, CA (US), October 2019 —Every tissue in the human body has an immune cell in it called a macrophage. Macrophages play important roles in the immune system's initial response to bacteria, viruses and wounds. But beyond that, each tissue macrophage also has specialized functions, tuned to the needs of that particular tissue.

For example, macrophages in the brain, called microglia, help support normal brain development. In the liver, macrophages are called Kupffer cells. They line tiny blood vessels in the liver, where they do a lot of things, including maintaining the body's iron levels and clearing away endotoxins produced by gut bacteria.

Researchers at University of California San Diego School of Medicine wanted to know: If most of these various tissue-specific macrophages all start out from the same precursor cells, how do they become so specialized? In other words, what makes a Kupffer cell a Kupffer cell and not a microglial cell in the brain or a macrophage in the blood? To find out, they tracked the conversion from precursor cell to Kupffer cell in exquisite detail over two weeks.

Their study, published October 3 in Immunity, sets the stage for understanding how macrophage specialization gets disrupted by — or contributes to — liver disease.

"We've been working on these cell identity regions of the genome for many years," said senior author Christopher K. Glass, M.D., Ph.D., professor of medicine and cellular and molecular medicine at UC San Diego School of Medicine. "For a long time, we had this idea that maybe looking at how genomic regions change over time could be used as a powerful system to understand how precursor cells differentiate. This is the first proof-of-concept for this approach, and we used it to discover a major cellular mechanism that controls cell development."

Kupffer cells are named for their discoverer, Karl Wilhelm von Kupffer, who first observed them in 1876. (Though it should be noted that he incorrectly assumed they were part of the liver's blood vessel lining.) Kupffer cells are known to be altered in certain liver diseases, though whether that's a cause or effect of the disease is unclear.

In Dr. Glass' study, the team engineered special mice with which they could easily clear all Kupffer cells from the liver, without disturbing other cell types. Sensing the loss of Kupffer cells, the livers quickly recruited monocytes — unspecialized immune cell precursors — circulating in the blood. The monocytes homed to the recently vacated blood vessel linings.

As the monocytes transformed into Kupffer-like cells over two weeks, the researchers tracked their genetic, molecular and cellular changes. In particular, the team pinpointed the parts of the genome that are switched "on" over the two-week differentiation process. By characterizing these regions, the researchers could determine the proteins that are being specifically activated to transform the monocytes into Kupffer cells. Then, with these protein identities known, they could infer which signals were coming from the liver to make it all happen. Some of the important cell signaling molecules involved included the Notch ligand DLL4, TGF-beta and LXR ligands.

In the end, the newly specialized liver macrophages weren't quite Kupffer cells, Dr. Glass said, because true Kupffer cells are derived from fetal cells during normal development, not from blood monocytes. But these new, monocyte-derived cells were nearly identical in terms of gene expression and function.

"We essentially reverse-engineered how liver tissue instructs precursor cells to specialize into Kupffer cells," Dr. Glass said. "And while we found strong evidence for the proteins and signals involved in Kupffer cell differentiation, to prove those proteins do what we think they do the next step will be to delete the genes that encode those proteins and see if we get the predicted outcomes."

The team is now exploring how Kupffer cell behavior changes in the context of disease, such as nonalcoholic steatohepatitis, a chronic metabolic disorder that causes liver damage. 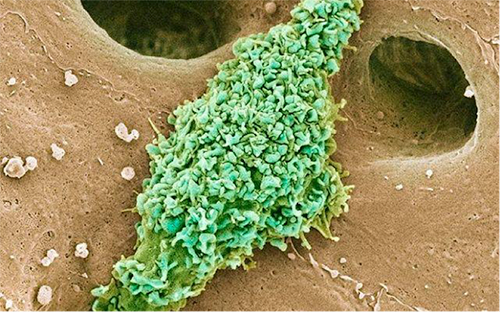