Viagra Shows Promise for Use in Bone Marrow Transplants

Bone marrow transplants, used mostly in the treatment of cancer, are life-saving procedures to restore the stem cells that generate new blood cells throughout a person's life. These blood-forming cells (called hematopoietic stem cells) normally reside only in the bone marrow. Obtaining them for transplants originally required drilling into the hip bone and using a special needle to remove cells directly from the bone marrow. Now it is more common to collect the cells from the blood, using drugs to get the stem cells to move from the bone marrow into the bloodstream.

The standard drug regimen for coaxing stem cells from the marrow to the bloodstream requires daily injections of the growth factor GCSF for several days before the stem cells can be collected, typically after four to six days of GCSF injections. Although less invasive than extracting cells directly from the bone marrow, this regimen is not always successful, often causes bone pain and other side effects, and cannot be tolerated by many patients who might otherwise benefit from a bone marrow transplant.

The new study, published October 10 in Stem Cell Reports, demonstrates an alternative regimen that mobilizes stem cells from the bone marrow in just two hours. It involves a single oral dose of Viagra followed two hours later by a single injection of Plerixafor.

"Our approach could significantly increase the number of patients who could benefit from bone marrow transplants," said Camilla Forsberg, Ph.D., professor of biomolecular engineering at UC Santa Cruz and senior author of the paper. “Even though there are already ways to do this, the standard regimen doesn’t work for everyone.”

Dr. Forsberg's lab conducted the study in mice, and researchers will need to conduct clinical trials in humans to confirm the safety and effectiveness of the new regimen. Both of the drugs are already approved by the Food and Drug Administration (FDA), however, and they are relatively inexpensive, Dr. Forsberg said.

"If we can make bone marrow transplants a super safe procedure, there are a lot of other disorders for which it could be life-changing, especially for children. Doctors could provide a one-time treatment for conditions that currently have to be managed over a patient's lifetime," said Stephanie Smith-Berdan, Ph.D., a research specialist in Dr. Forsberg's lab and first author of the paper.

Some bone marrow transplants use the patient's own stem cells — for example, to allow treatment with high doses of chemotherapy or radiation that can damage the bone marrow. In many cases, however, the patient needs new stem cells provided by a healthy donor. An easier method of obtaining the cells for transplants might attract more volunteer donors, Dr.Forsberg said.

Viagra, best known as a treatment for erectile dysfunction, is a safe and well-studied drug that promotes the widening of blood vessels (vasodilation), which increases blood flow to tissues. Initially developed as a treatment for high blood pressure, it is now used to treat a variety of vascular disorders, including pulmonary hypertension, altitude sickness and preeclampsia.

Dr. Forsberg's lab decided to test Viagra's ability to help mobilize hematopoietic stem cells from the bone marrow after observing that vascular changes in a strain of mice they were studying led to increased stem cell mobilization. The mice lack the gene for a cell surface protein, Robo4, which the lab's previous research had shown regulates blood vessel integrity to keep the stem cells in the bone marrow.

Plerixafor, the other drug in the combination, is an inhibitor of Cxcr4, which is a receptor on the surface of hematopoietic stem cells that helps them stick to their niche in the bone marrow. Plerixafor mobilizes the stem cells, but is not very effective on its own.

"When you dilate the blood vessels with Viagra, the cells mobilized by Plerixafor are better able to get out into the blood stream," Dr. Smith-Berdan said.

Viagra by itself did not lead to detectable increases in hematopoietic stem cells in the blood, so patients using it for other reasons need not worry about inadvertent stem cell mobilization, the authors noted. 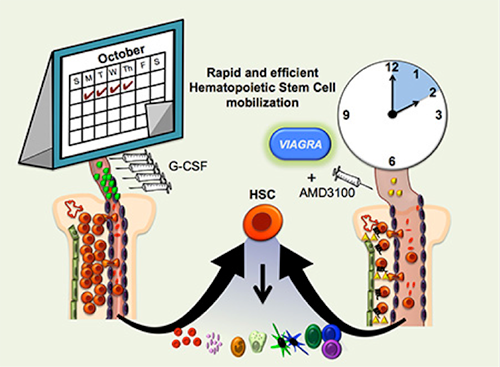 This diagram compares the standard regimen for mobilizing blood-forming stem cells from the bone marrow (on the left) with the new approach (on the right), which is much faster and easier. Image courtesy of Smith-Berdan, et al., Stem Cell Reports, 2019.