The researchers hope that the molecular pathology they identified, as reported in Cell Reports, can lead to potential therapeutic targets for Rett syndrome in the future.

Rett syndrome is a progressive neurodevelopmental disorder characterized by impairments in cognition and coordination, with varying severity. It occurs in roughly one in every 10,000 to 15,000 female births. However, it is difficult to initially identify because children appear to develop normally in the first 6 to 18 months.

"Rett syndrome is caused by mutations in a single gene called methyl-CpG binding protein 2, or MeCP2. The gene was identified over two decades ago and much has been uncovered since, but exactly how the mutations cause the pathology remains elusive," explained first author Hideyuki Nakashima, Ph.D., of Kyushu University’s Faculty of Medical Sciences.

In their past research, the team had identified that MeCP2 acts as a regulator for the processing of specific microRNAs to control the functions of neurons. So they went back to investigate if that pathway was also involved in the differentiation of neural stem cells.

Compared to messenger RNA, the final template transcribed from DNA that is used by a cell to synthesize proteins, microRNAs — or miRNAs — are much smaller and act to regulate messenger RNA to make sure the cell is making the correct amount of the desired protein.

"Through our investigation, we found several microRNAs associated with MeCP2, but only one affected the differentiation of neural stem cells: a microRNA called miR-199a," said Dr. Nakashima. "In fact, when either MeCP2 or miR-199a are disrupted, we found that it increased the production of cells called astrocytes."

Astrocytes are like the support cells of your brain. While neurons fire off the electrical signals, astrocytes are there to help maintain everything else. During development, astrocytes and neurons are generated from the same type of stem cells, known as neural stem cells, where their production is carefully controlled. However, dysfunction in MeCP2 or miR-199a causes these stem cells to produce more astrocytes than neurons.

"Further analysis showed that miR-199a targets the protein Smad1, a transcription factor critical for proper cellular development. Smad1 functions downstream of a pathway called BMP signaling, which is known to inhibit the production of neurons and facilitate the generation of astrocytes," Dr. Nakashima said.

To investigate the process further, the team established a brain organoid culture — a 3D culture of neural stem cells that can mimic aspects of brain development — from induced pluripotent stem cells (iPSCs) derived from patients with Rett syndrome. When they inhibited BMP (bone morphogenetic protein), the team was able to reduce abnormal neural stem cell differentiation.

"Our findings have given us valuable insight into the role of MeCP2, miR-199a and BMP signaling in the pathology of Rett syndrome," concluded Kinichi Nakashima, Ph.D., who headed the team. "Further investigation is needed, but we hope this can lead to clinical treatments for Rett syndrome symptoms." 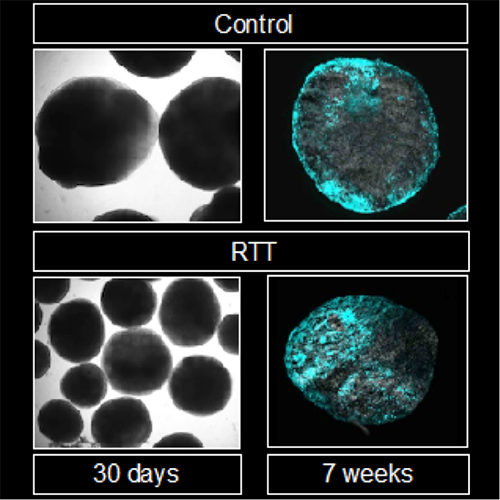 Images of brain organoids from control (top) and Rett syndrome (RTT) (bottom) patients, with astrocytes stained in cyan (note that the intensity of cyan color is higher in the RTT brain organoids). Image courtesy of Kyushu University/Nakashima Lab.