BOSTON, MA (US), August 2020 — Obesity is the main cause of type 2 diabetes and related chronic illnesses that together will kill more people around the globe this year than the Covid-19 coronavirus.

Scientists at Joslin Diabetes Center have delivered a proof of concept for a novel cell-based therapy against this dangerous condition.

Brown fat cells burn energy instead of storing energy as white fat cells do, said Dr. Tseng, senior author on a paper about the work in Science Translational Medicine. In the process, brown fat can lower excessive levels of glucose and lipids in the blood that are linked to metabolic diseases such as diabetes.

However, people who are overweight or obese tend to have less of this beneficial brown fat--a barrier that HUMBLE cells are designed to overcome, Dr. Tseng said.

She and her colleagues created the cells from human white fat cells in a progenitor stage (not yet fully developed into their final fat form). The investigators used a variant of the CRISPR-Cas9 genome editing system to boost expression of a gene called UCP1, which triggers white fat cell progenitors to develop into brown fat-like cells.

Transplanted into mice lacking an immune system, the HUMBLE progenitor cells developed into cells that functioned very much like the mice's own brown fat cells, said Dr. Tseng, who is also a professor of medicine at Harvard Medical School.

Her team compared transplants of these cells versus the original white fat cells in mice who were put on a high fat diet. Mice given the HUMBLE transplants displayed much greater sensitivity to insulin and ability to clear glucose from the blood (two key factors that are impaired in type 2 diabetes).

Perhaps surprisingly, the Joslin scientists demonstrated that these benefits were mostly due to signals from the transplanted cells to endogenous (existing) brown fat cells in the mice. "Cells in different tissues communicate with each other," Dr. Tseng said. "In this case, we found that our transplanted HUMBLE cells secrete a molecule called nitric oxide, which is carried by red blood cells to the endogenous brown cells and activates those cells."

If the HUMBLE technique continues to prove out in pre-clinical research, it might eventually be possible to generate this type of cell for individual patients, Dr. Tseng suggests. Such a procedure would remove a tiny amount of a patient's white fat cells, isolate the progenitor cells, modify those cells to boost expression of UCP1, and then return the resulting HUMBLE cells to the patient.

However, that individualized approach would be complicated and expensive, so the Tseng lab is pursuing two alternative routes that may be more practical for clinical use.

One alternative is to use cells that are not personalized but instead are encapsulated via biomaterials that protect the cells from rejection by a patient's immune system. (Joslin researchers and their collaborators have long studied such materials for cell transplants for type 1 diabetes.) The other option is gene therapies that directly express the UCP1 gene in white fat progenitor cells in the body, so that those cells acquire HUMBLE-like properties.

Dr. Tseng emphasized that this research is moving ahead despite the Covid-19 pandemic, which puts people with diabetes at much higher risk of serious outcomes if they are infected.

"Employing cell-based or gene therapies to treat obesity or type 2 diabetes used to be science fiction," she said. "Now scientific advances, such as CRISPR gene-editing technologies, will help us to improve the metabolism, the body weight, the quality of life and the overall health of people with obesity and diabetes." 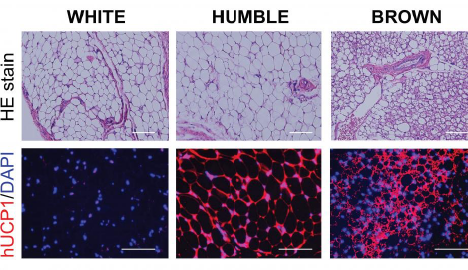 Microscopic images of the various types of fat tissues developed in mice after transplantation. Top panels show the fat tissue's general morphology and the bottom panels are the tissue sections stained with hUCP1 (red color), which is unique for brown fat cells. These images show that while the HUMBLE fat cells are morphologically similar to the white fat cells, they express the brown fat specific hUCP1 protein. Image courtesy of Joslin Diabetes Center.