LAUSANNE (CH), July 2020 — Biologists and bioengineers at Ecole Polytechnique Federale de Lausanne (EPFL) have designed a new method for growing simplified human mini-livers. Their process is a potentially important breakthrough in the quest for transplantable lab-grown tissues. In the shorter term, the miniaturized organs will serve as a platform for trialing treatments against non-alcoholic fatty liver disease, the most common liver disorder in the developed world. Their findings have been published in Nature Communications<span.

The EPFL scientists created a simplified tiny version of the organ, known as an organoid, using bipotent stem cells that occur naturally in the bile ducts connecting the liver to the gallbladder. But the real breakthrough lies in the fact that the researchers developed a new type of matrix that, like a scaffold, provides structure. The teams, led by professors Kristina Schoonjans, Ph.D., and Matthias Lutolf, Ph.D., then added peptides – the building blocks of proteins – to the medium to guide the growth of the liver cells.

The chemically defined matrix developed at EPFL stands apart from other commercially available substrates because its properties are more stable and non-immunogenic. In future, it could be used to grow transplantable organoids from healthy stem cells, which could be used to treat patients with end-stage liver disease.

“Most off-the-shelf substrates are made using mouse tumor cells, rendering them unsuitable for transplantation,” explained Saba Rezakhani, a doctoral assistant in the Lutolf lab and one of the paper’s lead authors. “Our matrix marks a major advance in regenerative medicine. It works just as well as existing solutions but contains no animal products.”

A platform for studying liver disease

In the shorter term, the new matrix will support research into non-alcoholic fatty liver disease – a disorder associated with obesity and diabetes that can cause liver fibrosis and, in more serious cases, cirrhosis and even liver cancer.

The team used this matrix to mimic the stiffness of healthy and fibrotic livers. “Organoid cells grown in a rigid matrix behave more like the cells of a diseased liver, with a compromised potential to regenerate, and signs of inflammation and injury,” said Dr. Schoonjans, last and corresponding author of this study.

The scientists are now working on turning their organoid into a research platform. “Using our method, we can recapitulate the fibrotic microenvironment and test potential treatments to see whether they stop or reverse the course of the disease,” said lead author Giovanni Sorrentino, a postdoctoral researcher in the Schoonjans lab.

Further research is needed, especially in the area of stem cell differentiation, before the new method developed at EPFL can be used to grow transplantable organs. “We’ve designed a clinically compliant organoid culture matrix that has a number of advantages” said Dr. Lutolf, who is co-corresponding author. “Now it’s up to clinical researchers to put our technology to work.” 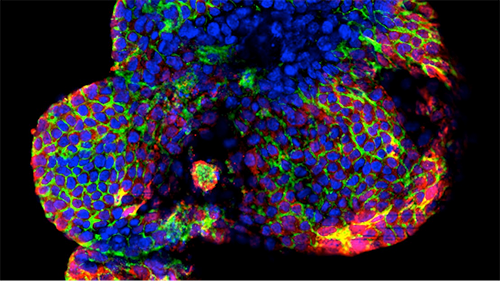 A liver organoid developed at EPFL offers new promise in transplantation and the study of liver disease. Image courtesy of ©2020 EPFL.