Terahertz waves fall in the far infrared/microwave part of the electromagnetic spectrum and can be produced by powerful lasers. Scientists have used terahertz pulses to control the properties of solid-state materials. They also have potential for manipulating living cells, as they don't damage them the way that ultraviolet or infrared light does. Research so far has led to contradictory findings about their effects on cells, possibly because of the way the experiments have been conducted.

iCeMS microengineer Ken-ichiro Kamei, Ph.D., and physicist Hideki Hirori, Ph.D., worked with colleagues to develop a better tool for investigating what happens when terahertz pulses are shone on human cells. The apparatus overcomes issues with previous techniques by placing cells in tiny microwells that have the same area as the terahertz light.

The team used the apparatus to explore the effects of terahertz radiation on induced pluripotent stem cells (iPSCs). These are cells that have been taken from skin or blood and changed into stem cells. Scientists are seeking to turn them into other types of cells and tissues to help treat diseases like muscular dystrophy.

"Terahertz pulses can generate a strong electric field without touching or damaging cells," said Dr. Hirori. "We tested their effect on iPSCs and discovered that the activity of some gene networks changes as a result of terahertz light exposure."

Further investigation found that these genes were influenced by zinc-dependent transcription factors. The scientists believe the terahertz pulses generate an electric field that causes zinc ions to move inside cells, impacting the function of transcription factors, which in turn activate or deactivate the genes they are responsible for.

Dr. Hirori said the findings could aid efforts to develop a technology that can manipulate iPSC differentiation into specific cells by turning off specific genes while keeping others on, paving the way for regenerative therapies for a wide range of diseases. 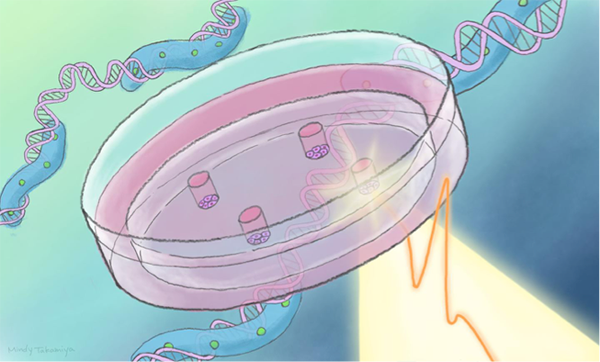