LA JOLLA, CA (US), October 2019 — We all know that food is essential to healthy development of the brain and body, especially in the earliest stages of life. But exactly how early brain growth is affected by nutrition is not as well understood, especially on a cellular level.

One reason for this lack of understanding is simply the difficulty of studying animals before they are born. But in a study involving tadpoles, which develop entirely outside of a mother's womb, scientists at Scripps Research were able to unearth new findings about how brain cells respond to — and recover from — lack of nutrition.

"With tadpoles, we can look at early stages of brain development that are typically inaccessible to us," said cell biologist Caroline McKeown, Ph.D., a senior staff scientist in the neuroscience lab of Hollis Cline, Ph.D., and lead author of the study. "This study showed us, for the first time in a vertebrate species, the cell signaling pathways that are integral to nutrient-responsive cell division in neural stem cells. These findings may lead to new approaches for starting and stopping cell growth in the brain."

The research, which appears in Development, has multiple potential applications — including improved prenatal care in humans. Dr. McKeown said the findings also will contribute to ongoing research in the lab on the role of neural stem cells in recovery from brain injury.

Typically, in a Xenopus tadpole and in most animals, stem cells known as "neural progenitors" flourish during early stages of development. These cells eventually mature into neurons, the cell type in the brain the controls thought and action.

In a previous study, Drs. McKeown and Cline found that when the tadpoles were deprived of food, their neural progenitor cells stopped dividing and their body growth decreased, but the animals remained alive and their behavior appeared normal. Surprisingly, if tadpoles were able to access food within about nine days, neural progenitor cells in the brain started dividing again and the tadpoles caught up to the growth state where they would have been if food had always been available.

What captured Dr. McKeown's attention were the life-or-death questions: What triggered the neural progenitor cells to be able to divide again? And how did it work? In the new study, she and Dr. Cline identified the cellular mechanisms underlying this developmental response.

"We know a lot of these fundamental cellular events are conserved across animal species, so it's possible that mammalian species are also capable of this kind of resilience to prenatal nutrient deprivation," Dr. McKeown said.

Once the researchers found that early brain development could bounce back after periods without food, they wanted to understand what was happening on a cellular level to tell neural progenitors to stop dividing and to start back up. They traced it to a well-known signaling pathway known as mTOR (short for "mammalian target of rapamycin"), which is a central regulator of cell metabolism, growth, proliferation and survival.

Interestingly, even without providing the tadpoles with any food, their brains could be relaunched into growth mode by activating the insulin receptor that sits on the surface of neuronal progenitor cells, Dr. Cline said. Insulin is a hormone that allows cells to use sugars from food as energy and can activate mTOR signaling. Being able to bypass the need for food on a cellular level could advance medical therapies for poor nutrition.

By carefully tracking the neural progenitor cells over time, Dr. McKeown also discovered that they were poised to divide as soon as the nutrient signals reached them. This meant the cells had halted their progression when they were right on the verge of dividing. This is typically seen in cells under stress, and clearly starvation is a type of stress.

"The observation that food affects brain cell division was already known, but nobody dug more deeply into how food was having that effect," added Dr. Cline, chair of the Department of Neuroscience in La Jolla. "We envision this knowledge becoming useful in understanding what can go wrong in the absence of maternal nutrition, and how important it is to respond quickly to a such an event." 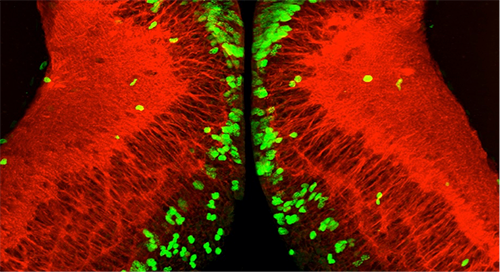 After periods without food, nutrition induces widespread proliferation of neural stem cells (green) in the tadpole brain. Mature neurons are shown in red. Image courtesy of the Cline lab.