LOS ANGELES, CA (US), June 2019 — Scientists can't make a living copy of your brain outside your body. That's the stuff of science fiction. But in a new study, they recreated a critical brain component, the blood-brain barrier, that functioned as it would in the individual who provided the cells to make it.

Their achievement — detailed in a study published in Cell Stem Cell — provides a new way to make discoveries about brain disorders and, potentially, predict which drugs will work best for an individual patient.

The blood-brain barrier acts as a gatekeeper by blocking toxins and other foreign substances in the bloodstream from entering brain tissue and damaging it. It also can prevent potential therapeutic drugs from reaching the brain. Neurological disorders such as amyotrophic lateral sclerosis (Lou Gehrig's disease), Parkinson's disease and Huntington's disease, which collectively affect millions of people, have been linked to defective blood-brain barriers that keep out biomolecules needed for healthy brain activity.

For their study, a team led by Cedars-Sinai investigators generated stem cells known as induced pluripotent stem cells (iPSCs), which can produce any type of cell, using an individual adult's blood samples. They used these special cells to make neurons, blood-vessel linings and support cells that together make up the blood-brain barrier. The team then placed the various types of cells inside Organ-Chips, which recreated the body's microenvironment with the natural physiology and mechanical forces that cells experience within the human body.

The living cells soon formed a functioning unit of a blood-brain barrier that functions as it does in the body, including blocking entry of certain drugs. Significantly, when this blood-brain barrier was derived from cells of patients with Huntington's disease or Allan-Herndon-Dudley syndrome, a rare congenital neurological disorder, the barrier malfunctioned in the same way that it does in patients with these diseases.

While scientists have created blood-brain barriers outside the body before, this study further advanced the science by using iPSCs to generate a functioning blood-brain barrier, inside an Organ-Chip, that displayed a characteristic defect of the individual patient's disease.

The study's findings open a promising pathway for precision medicine, said Clive Svendsen, Ph.D., director of the Cedars-Sinai Board of Governors Regenerative Medicine Institute and the study’s senior author. "The possibility of using a patient-specific, multicellular model of a blood-brain barrier on a chip represents a new standard for developing predictive, personalized medicine," he said. 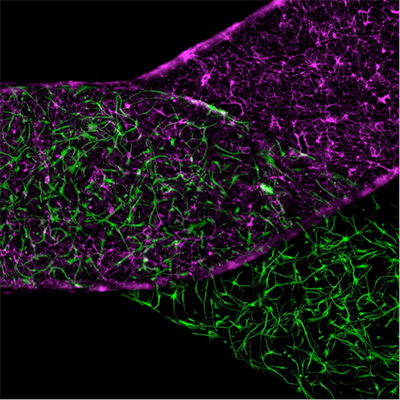 High-magnification image shows a blood-brain barrier Organ-Chip, with brain macrovascular endothelial-like cells in magenta on the blood side and support cells known as astrocytes in green on the brain side. Image courtesy of Cedars-Sinai/Cell Stem Cell.