SHENZHEN (PRC), August 2020 — SARS-CoV-2 can infect human neural progenitor cells and brain organoids, as shown by researchers from the Shenzhen Institutes of Advanced Technology (SIAT) of the Chinese Academy of Sciences and their collaborators from the University of Hong Kong (HKU).

Their study was published in Cell Research on August 4.

Coronavirus disease 2019 (COVID-19) is caused by SARS-CoV-2, also known as the novel severe acute respiratory syndrome coronavirus 2. Over 17 million confirmed cases of COVID-19 and more than 686,703 associated deaths have been reported across 218 countries and geographical regions as of August 3.

A study of 214 hospitalized COVID-19 patients in Wuhan reported that 36.4 percent of all patients and 45.5 percent of severe cases had neurologic symptoms. In addition, studies from France and Germany have revealed that 84.5 percent and 36.4 percent, respectively, of COVID-19 patients had viral infections in the brain. However, there has been no direct experimental evidence of SARS-CoV-2 infection in the human central nervous system (CNS).

The results demonstrated that iPSC-derived hNPCs were permissive to SARS-CoV-2 infection, but not SARS-CoV infection. Extensive protein expression and infectious viral particles were detected in neurospheres and brain organoids infected with SARS-CoV-2, which suggested SARS-CoV-2 could productively infect the human brain.

"Overall, our study provides the first evidence of direct SARS-CoV-2 infection in human brain organoids, which contributes to our understanding of the pathogenesis of neurological complications in COVID-19," said study leader Huang Jiandong, Ph.D., from HKU.

The research team suggested that chronic and long-term consequences of SARS-CoV-2 infection of the CNS should be closely monitored. 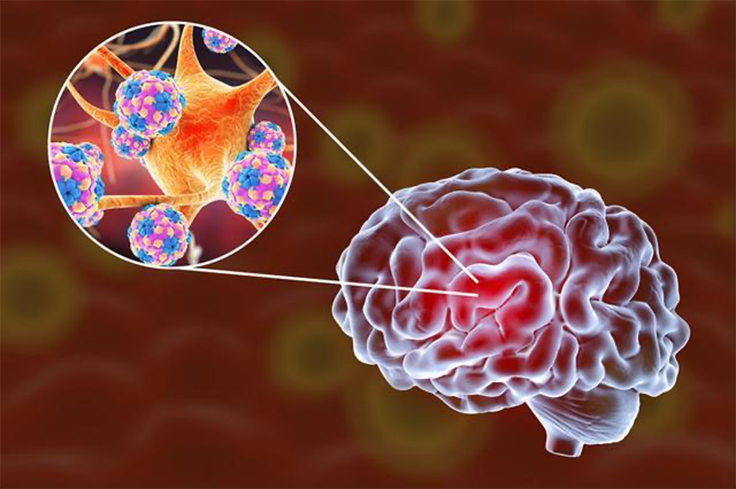