Placenta is initiated first, as cells of a fertilized egg divide and specialize

LONDON (UK), September 2020 — The first stages of placental development take place days before the embryo starts to form in human pregnancies, according to a new study led by researchers at the Francis Crick Institute, London. The finding highlights the importance of healthy placental development in pregnancy. They also could lead to future improvements in fertility treatments such as IVF and a better understanding of placental-related diseases in pregnancy.

The study, published recently in Nature, looked at the biological pathways active in human embryos during their first few days of development to understand how cells acquire different fates and functions within the early embryo.

The researchers observed that shortly after fertilization as cells start to divide, some start to stick together. This triggers a cascade of molecular events that initiate placental development. A subset of cells change shape, or “polarize,” and this drives the change into a placental progenitor cell – the precursor to a specialized placenta cell – that can be distinguished by differences in genes and proteins from other cells in the embryo.

“This study highlights the critical importance of the placenta for healthy human development,” said senior author Kathy Niakan, Ph.D., group leader of the Human Embryo and Stem Cell Laboratory (HESCL) at Crick and professor of reproductive physiology at the University of Cambridge. “If the molecular mechanism we discovered for this first cell decision in humans is not appropriately established, this will have significant negative consequences for the development of the embryo and its ability to successfully implant in the womb,” she added.

The team also examined the same developmental pathways in mouse and cow embryos. They found that while the mechanisms of later stages of development differ between species, the placental progenitor is still the first cell to differentiate.

“We’ve shown that one of the earliest cell decisions during development is widespread in mammals, and this will help form the basis of future developmental research. Next we must further interrogate these pathways to identify biomarkers and facilitate healthy placental development in people, and also cows or other domestic animals,” said Claudia Gerri, lead author of the study and HESCL postdoctoral training fellow.

During IVF, one of the most significant predictors of an embryo implanting in the womb is the appearance of placental progenitor cells under the microscope. If researchers could identify better markers of placental health or find ways to improve it, this could make a difference for people struggling to conceive.

“Understanding the process of early human development in the womb could provide us with insights that may lead to improvements in IVF success rates in the future. It could also allow us to understand early placental dysfunctions that can pose a risk to human health later in pregnancy,” said Dr. Niakan. 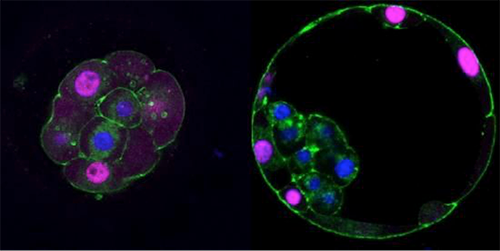