A patch that could help heal broken hearts

RALEIGH, NC (US), November 2020 — According to the American Heart Association, heart disease is the leading cause of death worldwide in recent years. During a heart attack, or myocardial infarction (MI), a blocked artery and the resulting oxygen deprivation cause massive cardiac cell death, blood vessel impairment and inflammation. Now, researchers reporting in ACS Biomaterials Science & Engineering have developed a cardiac patch with tiny engineered blood vessels that improved recovery from MI in rats and pigs.

To effectively treat MI, lost heart muscle tissue must regenerate and new blood vessels must form to restore oxygen and nutrients to cells. Scientists have tried to develop patches containing various therapeutic cells to treat MI, but so far most have been too cumbersome to make, or they don't restore both cardiac muscle and blood supply to the injured site.

Ke Cheng, Ph.D., and colleagues at the University of North Carolina at Chapel Hill and North Carolina State University, previously developed a relatively easy-to-make pre-vascularized cardiac patch, which contained engineered microvessels in a fibrin gel spiked with cardiac stromal cells. When implanted into rats after an MI, the cells in the patch secreted growth factors that made cardiac muscle and blood vessels regrow. Now, the researchers wanted to test the patch further in rats, as well as in pigs, which have cardiovascular systems more similar to humans than those of rodents.

The researchers implanted the cardiac patch in rats that recently had a heart attack. Four weeks later, rats that received the patch had less scar tissue, increased cardiac muscle and improved cardiac pump function compared with untreated rats. The team observed similar effects in pigs that had undergone MI and were treated with the patches. The patch increased recruitment of the pigs' progenitor cells to the damaged area and enhanced the growth of new blood vessels, as well as decreased cardiac cell death and suppressed inflammation.

Although prior studies have used blood vessel-forming cells or natural blood vessels to vascularize cardiac patches, this study is the first to demonstrate the success of pre-vascularized cardiac stromal cell patches using microengineered synthetic blood vessels for treating MI in a large animal model. More studies on the mechanisms, safety and efficacy of patch repair are needed before the technology can be applied to humans, the researchers say. 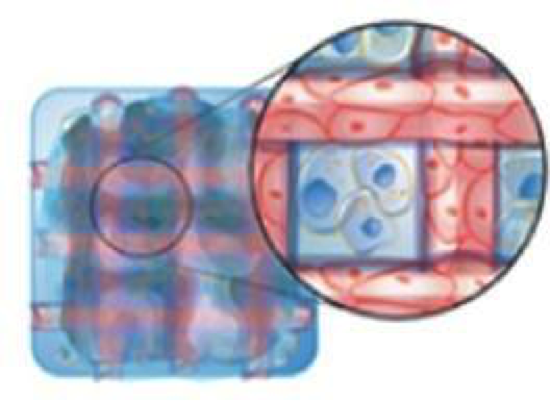