LAUSANNE (CH), November 2020 — There was a time when the idea of growing organs in the lab was the stuff of science fiction. Today, stem cell biology and tissue engineering are turning fiction into reality with the advent of organoids: tiny lab-grown tissues and organs that are anatomically correct and physiologically functional.

The appeal of organoids is obvious. Essentially, they can provide us with an on-demand production of tissues and mini-organs for pharmaceutical and medical research, without constantly having to rely on donors. And although that goal might still be a long way off, we're slowly getting closer.

EPFL has been involved in the development of organoids for a while now, with the lab of Matthias Lütolf, Ph.D., at the School of Life Sciences leading the charge. Now, Dr. Lütolf's lab has successfully produced a mouse heart organoid in its early embryonic stages. The project was led by Giuliana Rossi, a post-doctoral researcher from Lütolf's laboratory, and published in Cell Stem Cell.

The researchers grew their organoids from mouse embryonic stem cells, which under the right conditions can self-organize into structures that "mimic aspects of the architecture, cellular composition and function of tissues found in real organs," the researchers write in their paper. Placed in cell-culture under specific conditions, the embryonic stem cells form a three-dimensional aggregate called a "gastruloid," which can follow the developmental stages of the mouse embryo.

The idea behind this study was that the mouse gastruloid can be used to mimic the early stages of heart development in the embryo. This is a rather unexplored use of organoids, which are generally grown to mimic adult tissues and organs. But there are three features of mouse gastruloids that make them a suitable template for mimicking embryonic development: They establish a body plan like real embryos, they show similar gene expression patterns and, when it comes to the heart, which is the first organ to form and function in the embryo, the mouse gastruloid also preserves important tissue-tissue interactions that are necessary to grow one.

Armed with this, the researchers exposed mouse embryonic stem cells to a "cocktail" of three factors known to promote heart growth. After 168 hours, the resulting gastruloids showed signs of early heart development: They expressed several genes that regulate cardiovascular development in the embryo, and they even generated what resembled a vascular network.

But more importantly, the researchers found that the gastruloids developed what they call an "anterior cardiac crescent-like domain." This structure produced a beating heart tissue, similar to the embryonic heart. And much like the muscle cells of the embryonic heart, the beating compartment was also sensitive to calcium ions.

Opening up an entirely new dimension to organoids, the breakthrough work shows they can also be used to mimic embryonic stages of development. "One of the advantages of embryonic organoids is that, through the co-development of multiple tissues, they preserve crucial interactions that are necessary for embryonic organogenesis," Dr. Rossi said. "The emerging cardiac cells are thus exposed to a context similar to the one that they encounter in the embryo." 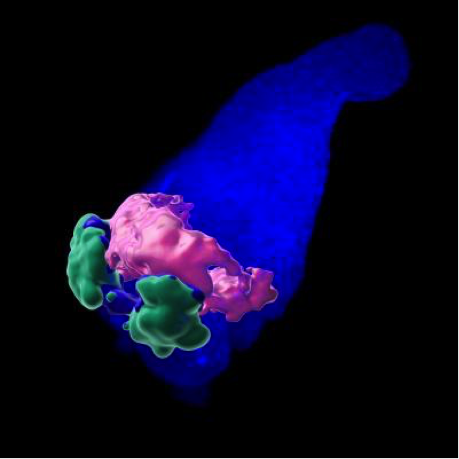