TOKYO (JP), April 2021 — Researchers from Tokyo Metropolitan University have shown that skeletal muscle satellite cells, key players in muscle repair, proliferate better in low glucose environments. This is contrary to conventional wisdom that says mammalian cells fare better when there is more sugar to fuel their activities. Because ultra-low glucose environments do not allow other cell types to proliferate, the team could produce pure cultures of satellite cells, potentially a significant boost for biomedical research.

Healthy muscles are an important part of a healthy life. With the wear and tear of everyday use, our muscles continuously repair themselves to keep them in top condition. In recent years, scientists have begun to understand how muscle repair works at the cellular level. Skeletal muscle satellite cells have been found to be particularly important, a special type of stem cell that resides between the two layers of sheathing, the sarcolemma and basal lamina, that envelopes myofiber cells in individual muscle fibers.

When myofiber cells get damaged, the satellite cells go into overdrive, multiplying and finally fusing with myofiber cells. This not only helps repair damage, but also maintains muscle mass. To understand how we lose muscles due to illness, inactivity or age, getting to grips with the specific mechanisms involved is a key challenge for medical science.

A team of scientists from Tokyo Metropolitan University led by Yasuro Furuichi, Ph.D., Yasuko Manabe, Ph.D., and Nobuharu L. Fujii, Ph.D., has been studying how skeletal muscle satellite cells multiply outside the body. Looking at cells multiplying in petri dishes in a growth medium, they noticed that higher levels of glucose had an adverse effect on the rate at which they grew. This is counterintuitive; glucose is considered to be essential for cellular growth. It is converted into ATP, the fuel that drives a lot of cellular activity. Yet, the team confirmed that lower glucose media led to a larger number of cells, with all the biochemical markers expected for greater degrees of cell proliferation.

They also confirmed that this doesn't apply to all cells, something they successfully managed to use to their advantage. In experiments in high glucose media, cultures of satellite cells always ended up as a mixture, simply due to other cell types in the original sample also multiplying. By keeping the glucose levels low, they were able to create a situation where satellite cells could proliferate, but other cell types could not, giving a very pure culture of skeletal muscle satellite cells. This is a key prerequisite for studying these cells in a variety of settings, including regenerative medicine.

So, was the amount of glucose in their original experiment somehow "just right"? The team added glucose oxidase, a glucose digesting enzyme, to get to even lower levels of glucose, and grew the satellite cells in this glucose-depleted medium. Shockingly, the cells seemed to fare just fine and proliferated normally. The conclusion is that these particular stem cells seem to derive their energy from a completely different source. Work is ongoing to try to pin down what this is.

The team notes that the sugar levels used in previous experiments matched those found in diabetics. This might explain why loss of muscle mass is seen in diabetic patients and may have significant implications for how we might keep our muscles healthier for longer. 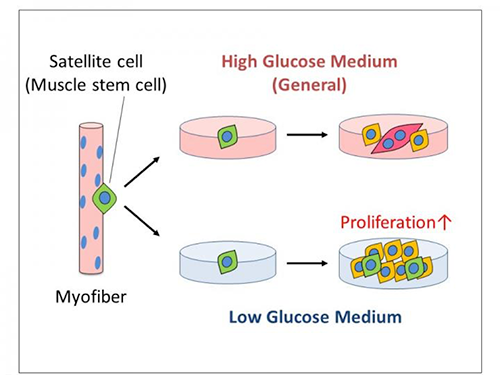