SAN DIEGO, CA (US), November 2020 — Finding just the right model to study human development — from the early embryonic stage onward — has been a challenge for scientists over the last decade. Now, bioengineers at the University of California San Diego have homed in on an unusual candidate: teratomas.

Teratomas (Greek for “monstrous tumors”) are tumors made up of different tissues such as bone, brain, hair and muscle. They form when a mass of stem cells differentiates uncontrollably, forming all types of tissues found in the body. Teratomas are generally considered an undesired byproduct of stem cell research, but UC San Diego researchers found an opportunity to study them as models for human development.

Researchers report their work in a paper published Nov. 4 in Cell.

“We’ve been fascinated with the teratoma for quite a while,” said Prashant Mali, Ph.D., a professor of bioengineering at the UC San Diego Jacobs School of Engineering. “Not only is the teratoma an intriguing tumor to look at in terms of the diversity of cell types, but it also has regions of organized tissue-like structures. This prompted us to explore its utility in both cell science and cell engineering contexts.”

“There’s no other model like it. In just one tumor, you can study all of these different lineages, all of these different organs, at the same time,” said Daniella McDonald, an M.D/Ph.D. candidate in Mali’s lab and co-first author of the study. “Plus, it’s a vascularized model, it has a three-dimensional structure and it’s human-specific tissue, making it the ideal model for recreating the context in which human development happens.”

The team used teratomas grown from human stem cells injected under the skin of immunodeficient mice. They analyzed the teratomas with a technique called single-cell RNA sequencing, which profiles the gene expression of individual teratoma cells. The researchers were able to map 20 cell types, or “human lineages” (brain, gut, muscle, skin, etc.) that were consistently present in all the teratomas they analyzed.

The researchers then used the gene-editing technology CRISPR-Cas9 to screen and knock out 24 genes known to regulate development. They found multiple genes that play roles in the development of multiple lineages.

“What’s remarkable about this study is that we could use the teratoma to discover things in a much faster way. We can study all of these genes on all of these human lineages in a single experiment,” said co-first author Yan Wu, who worked on this project as a Ph.D. student in the labs of Mali and UC San Diego bioengineering professor Kun Zhang, Ph.D. “With other models, like organoids, that separately model one lineage at a time, we would have had to run many different experiments to come up with the same results as we did here.”

“Teratomas are a very unique type of human tissue. When examined through the lens of single-cell sequencing, we can see that they contain most major representative cell types in the human body. With that understanding, we suddenly have an extremely powerful platform to understand, manipulate and engineer human cells and tissues in a far more sophisticated way than what was previously possible,” Dr. Zhang said.

The researchers also showed that they can “molecularly sculpt” the teratoma to be enriched in one lineage — in this case, neural tissue. They accomplished this feat using a microRNA gene circuit, which acts like a molecular chisel by carving away unwanted tissues — these are selectively killed off using a suicide gene — and leaving behind the lineage of interest. The researchers say this has applications in tissue engineering.

“We envision that this study will set a new foundation in the field. Hopefully, other scientists will be using the teratoma as a model for future discoveries in human development,” McDonald said. 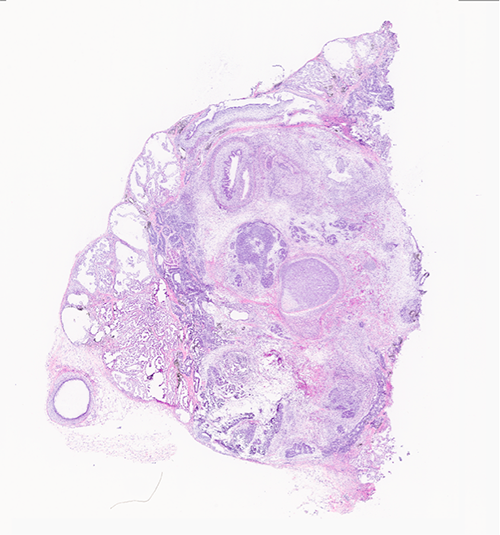 Histology image of a teratoma. Courtesy of UC San Diego.