How randomness and collective dynamics define a stem cell

KLOSTERNEUBURG (AT), July 2020 — Without stem cells, human life would not exist. Due to them, a lump of cells becomes an organ, a fertilized egg develops into a baby and tissues of our body can be continuously renewed.

But what actually makes a stem cell? How do they know when to divide to replace a dying cell? Are these a stable population of specially gifted cells?

Scientists at the Institute of Science and Technology (IST) Austria discovered that instead, stem cells might emerge due to the collective behavior of cells within the organs. They saw that the shape of the surrounding tissue, jointly to the pattern of seemingly random movements of the cells determined the cell’s role.

The scientists published their study in PNAS on July 1. Their results could lead to a deeper understanding of organ renewal and development.

Stem cells are central to organ development and renewal. In most organs, stem cells are located in specific regions and, in some cases, can be identified through several intrinsic properties, like molecular markers. They can differentiate into various types of cells and divide indefinitely to produce more stem cells.

However, does this mean the stem cell at the top is immortal? Or can any cell overthrow this? The scientific community is in an open debate whether stem cells actually arise from intrinsic cell properties or from the collective dynamics of the tissue itself. In this second scenario, potential stem cells are in constant competition to sit in certain “niche” regions. Each cell wants to overtake its neighbor by replication and, therefore, continuously pushes them. The functional stem cell will be the one that wins this competition, while losers will be pushed away from the niche, differentiate, and ultimately die.

In this new study, Edouard Hannezo, Ph.D., and his group at IST Austria looked at the mechanism to overcome such pushing forces away from the niche, in collaboration with researchers from the National Cancer Institute of the Netherlands and the University of Cambridge. They used a live-imaging microscope to record stem cell movements in the breast, intestine and kidney tissue.

The team found that in addition to constant flow and pushing forces, many random movements were observed. Why would those be important?

“A famous saying in real estate business is ‘location, location, location.’ In the case of stem cells, this saying transfers to a location determining stemness (rather than the other way around). Then, random movements become key, as they allow you to get to the right location even if you started in the wrong one,” Dr. Hannezo explained.

Under that framework, the tissues look like the exit of the subway station in the rush hour, with some people able to randomly turn back against the drift of the mass, trying to take the subway again. Under this metaphor, random movements are key to allow cells away from the stem cell niche to eventually go back to it.

“We wanted to know what defines the number and dynamics of the stem cells, and to what extent this could be answered by mathematically exploring only the movements of the cells and the geometry of the organs,” said Bernat Corominas-Murtra, Ph.D., the leading scientist on this study. They then mathematically mapped this noisy cell dynamic into the geometry of the organs and could predict, among other things, the number of functional stem cells (the ones that can get to the right location in time, given the amount of noise/mobility in the system). They found that during tissue renewal or growth, stem cell regions developed naturally, without needing to make assumptions on the molecular nature of the cells. Therefore, the scientists showed that the dynamics and geometry alone play an essential role.

In describing their results, Dr. Corominas-Murtra said, “You would expect that the randomness of cell movements blurs the properties of the system or makes it more unstable. Instead, it is key for the emergence of robust, complex patterns like the stem cell region, which remarkably coincides with the one previously identified using biomolecular markers of individual cells.”

These results contribute to the open debate on the nature of stem cells in tissues and potentially opens a new dimension in the understanding of organ renewal. 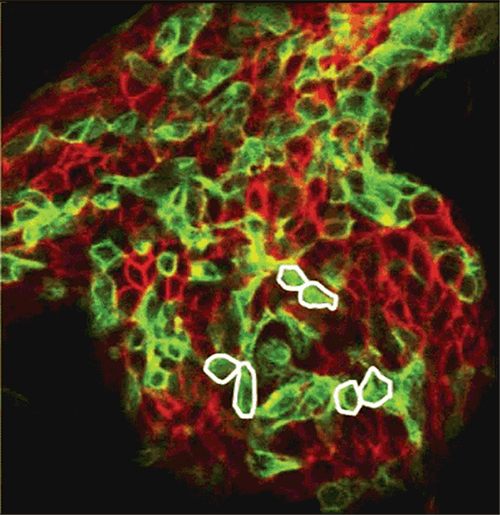 Five consecutive microscopic images of the mammary gland, taken over eight hours, show the random movement of stem cells that make the cells spread through the tissue. All cells of the same lineage are marked. Image courtesy of ©Colinda Scheele/Institut Oncode.