CINCINNATI, OH (US), June 2019 — Researchers suggest a possible cell-based therapy to stimulate lung development in fragile premature infants who suffer from a rare condition called bronchopulmonary dysplasia (BPD), which in the most severe cases can lead to lifelong breathing problems and even death.

The tests led to a proposal to develop cell therapy based on what are called c-KIT endothelial progenitor cells. The cells are common in embryonic and neonatal lungs and help in the formation of capillaries and air sacs in the lungs called alveoli. But premature babies with already underdeveloped lungs frequently rely on mechanical breathing assistance, which further interferes with early lung development, according to Vlad Kalinichenko, M.D., Ph.D, a physician/researcher at the Cincinnati Children's Perinatal Institute's Center for Lung Regenerative Medicine and lead study investigator.

”Our findings suggest using c-KIT-positive endothelial cells from donors, or generating them with pluripotent stem cells, might be a way to treat BPD or other pediatric lung disorders associated with loss of alveoli and pulmonary microvasculature."

Dr. Kalinichenko and colleagues study extensively the critical role the FOXF1 gene has in lung development. The researchers also explore different situations where mutation of the gene can disrupt the function of the FOXF1 protein, affecting lung development or causing disease.

This study is the first to suggest the possibility of using donated c-KIT pulmonary endothelial progenitor cells for therapy or those generated with pluripotent stem cells, which can become any cell type in the body and be derived from a patient's own cells. That conclusion was based in part on tests the researchers performed by using c-KIT-positive endothelial progenitor cells to treat neonatal mice that had been exposed to hyperpoxia (over oxygenation) to model the BPD condition in the animals. They found that the infusion of cells in peripheral blood increased the formation of pulmonary blood vessels and air sacs in the animals.

Extensive preclinical testing in larger laboratory animals, such as rats and sheep, will be needed before Dr. Kalinichenko and his colleagues would consider recommending the cell-therapy approach be tested in patients, he said. Future work will also include further technical refinement of the therapeutic approach and ongoing efficacy testing in animal models of BPD. It also includes developing a specific cell differentiation protocol for generating c-KIT-positive endothelial progenitor cells from induced pluripotent stem cells derived from patients.

Dr. Kalinichenko estimated the additional preclinical development work will require an estimated two to three years before the technology potentially reaches a point where it can be proposed for possible clinical testing. 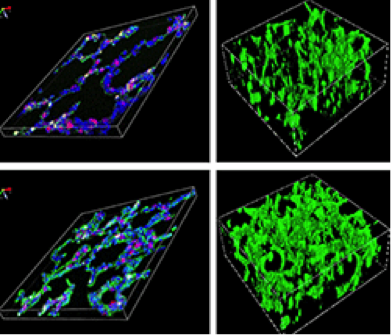 The top two confocal microscopic images in this panel show underdeveloped pulmonary capillary networks in the lung of a laboratory mouse over exposed to oxygen (hyperpoxia) to mimic bronchopulmonary dysplasia, a condition that disrupts lung development in premature babies. The bottom two images show increased capillary density after a mouse with hyperpoxia was treated with c-KIT+ endothelial progenitor cells, a potential cell-based therapy reported by researchers in the American Journal of Respiratory and Critical Care Medicine. Image courtesy of Cincinnati Children’s Hospital Medical Center.