FUKUOKA (JP), December 2020 — In a new study published in Nature, researchers in Japan report that activating just eight genes for producing gene-controlling proteins is enough to convert mouse stem cells directly into oocyte-like cells that mature and can even be fertilized like egg cells.

On top of providing new insights into the mechanisms of egg cell development, the research may lead to a simple route for generating highly specialized substances unique to oocytes for use in reproductive biology and medicine.

Stored in the body until they mature into egg cells ready for fertilization, oocytes represent the very first step in the creation a new human life. Oocytes are extremely unique because of their ability to bring forth the over 200 kinds of highly differentiated cells needed to create an individual person. One key to this ability is the complex mixture of substances within the fluid-like cytoplasm filling the cells.

So extraordinary are oocytes and their cytoplasm that replacing an oocyte’s DNA-containing nucleus with that of a body cell — a process called somatic cell nuclear transfer — can produce a new life, as famously demonstrated with Dolly the sheep.

Thus, a fundamental understanding of oocytes and their development is important for both advancing reproductive medicine and better grasping how life propagates, but knowledge of the many genes that orchestrate oocyte development is still far from complete.

Analyzing the development of oocytes from mice, researchers led by Katsuhiko Hayashi, Ph.D., professor at Kyushu University’s Faculty of Medical Sciences, have now identified eight genes for gene-triggering proteins known as transcription factors that not only are necessary for oocyte growth but also can directly convert mouse stem cells into oocyte-like cells.

“I was initially in complete disbelief to see mouse stem cells so quickly and easily take the form of oocytes based on introducing just a handful of factors, but repeated experiments proved it was true,” said Nobuhiko Hamazaki, Ph.D., first author on the study reporting the results and assistant professor at Kyushu University at the time of the research. “To find that eight transcription factors could lead to such big changes was quite astonishing.”

Working in collaboration with researchers at RIKEN, Dr. Hayashi’s group found that both mouse embryonic stem cells and induced pluripotent stem cells (iPSCs) — which can be created from adult body cells — consistently converted into oocyte-like cells when forced to produce the set of eight transcription factors, with only four factors being sufficient in some cases though with worse reproducibility.

“That stem cells can be directly converted into oocyte-like cells without following the same sequence of steps that happen naturally is remarkable,” Dr. Hayashi said.

When grown in the presence of other cells usually found around oocytes, the oocyte-like cells developed structures similar to mature egg cells but with an abnormal chromosome structure. Despite this, the mature oocyte-like cells could be fertilized in vitro and exhibited early development, with some even progressing to an eight-cell stage.

Though the modified nuclei of the oocyte-like cells may not be usable in the long run, this is no problem for applications needing mainly the oocyte cytoplasm, such as for studies of reproductive biology and for treatments like mitochondrial replacement therapy, in which parts of oocytes are replaced to prevent mothers from passing to their children diseases related to the mitochondria.

“Cytoplasm from oocytes is an invaluable resource in reproductive biology and medicine, and this method could provide a novel tool to producing large amounts of it without any invasive procedures,” commented Dr. Hayashi. “While the processes could still be much more complex for humans, these initial results in mice are very promising.” 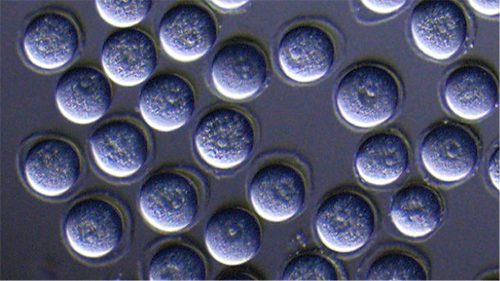