Culling cancer before it stems

OKAYAMA, (JP), August 2020 — Today’s lifestyle brings us in contact with multiple chemicals daily: in packaged food, cosmetics, construction materials, aerosols and so on. A number of these chemicals have been labeled "carcinogens," based on their ability to cause cancer in humans or other living things.

Because cancer is a major cause of illness, disability and death worldwide, scientists have developed several different ways to test chemicals for carcinogenicity in the laboratory. However, these methods are complex and take a long time to yield results, which makes it difficult for scientists to test large numbers of chemicals.

Now, in a paper recently published in Scientific Reports, an international research team led by Masaharu Seno, Ph.D., of Okayama University, Japan, reports a new method that can achieve this quickly. "It takes only one week for our method to yield results," noted Professor Seno. This represents a considerable improvement over existing methods.

The method involves stem cells — precursor cells that mature into various different cells with specialized functions, such as blood cells or neurons. Previously, Professor Seno's research team had used a certain kind of stem cell from mice, called mouse induced pluripotent stem cells, to establish a model in which healthy stem cells converted to cancer stem cells (CSCs) in four weeks when kept in a conditioned culture medium of mouse lung cancer cells. In this study, the researchers reasoned that adding a carcinogenic chemical to the conditioned medium should boost this conversion.

Based on this idea, the researchers conducted a series of week-long experiments to test 110 chemicals. At the end of it, they found that three chemicals — namely, PDO325901, CHIR99021 and dasatinib — had resulted in the formation of CSCs. What's interesting is that all three are actually known to suppress the intracellular signaling that leads to the growth and survival of cancer cells.

When they injected live mice with stem cells that had been exposed to any of those three chemicals, malignant tumors grew in the mice within six weeks. The CSCs obtained by exposing mouse stem cells to the three chemicals also began making more copies of proteins often associated with the growth of cancer cells.

Upon additional analyses, the scientists were able to identify the specific cellular pathways that these chemicals all trigger to cause the conversion.

These findings prove the efficacy and potential of this rapid testing method. Professor Seno said the method can have many applications. "Because pluripotent stem cells can develop into all cells in an adult human body, a wide range of cancer stem cells can be obtained with our method, enabling the efficient risk assessment of many chemicals for a variety of cancers. This will lead to more precise cancer prevention strategies as well as treatments," he said.

He also believes that this screening method will be "a good resource for studying the mechanisms of cancer development." 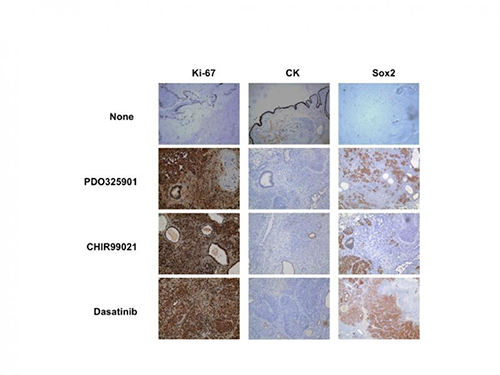 Tumorigenicity of the pluripotent stem cells one week after treatment. Image courtesy of Creative Commons license.