CHICAGO, IL (US), September 2020 — Researchers at the University of Illinois Chicago have developed a unique method for precisely controlling the deposition of hydrogel, which is made of water-soluble polymers commonly used to support cells in experiments or for therapeutic purposes. Hydrogel mimics the extracellular matrix – the natural environment of cells in the body.

The researchers noticed that their technique – which allows for the encapsulation of a single cell within a minute hydrogel droplet – can be used to coax bone marrow stem cells into specialized cells.

Their findings are reported in Advanced Science.

The new technique is an improvement over existing approaches that often mix much larger amounts of hydrogel with cells in an uncontrolled manner, which can make interactions between cells and their surroundings difficult to study. The new hydrogel deposition technique may also be useful for therapeutic purposes, such as for supporting stem cells used to create new tissues.

According to Dr. Shin, the team’s deposition technique brings the ratio between hydrogels and cells in line with what is seen in the body, and importantly, precisely controls the ratio on a single cell basis.

Dr. Shin and colleagues also observed that stem cells in thinner gel droplets expanded more rapidly than they did in bulk gels.

“We observed that stem cells expand several orders of magnitude faster in thin gel droplets, and so they experience more tension than they do in bulk gels made of the same material,” said Sing Wan Wong, a postdoctoral fellow in Shin’s lab and first author on the study. “We believe this tension encourages stem cells in thin gel coatings to more readily become bone cells, compared to stem cells in bulk gels.”

The team believes the thin hydrogel deposition technique may help in the production of bone tissue from stem cells to use as regenerative therapeutics. 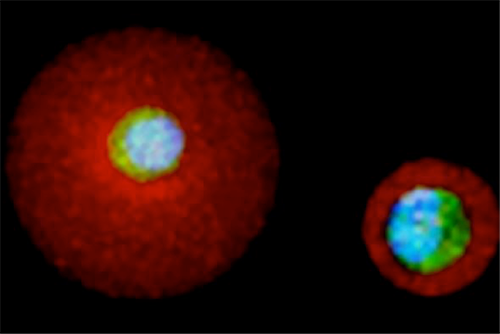