AARHUS (DK), November 2020 – In a screening for a functional impact to the neuronal differentiation process, Danish researchers identified a specific circular RNA, circZNF827, which surprisingly "taps the brake" on neurogenesis. The results provide an interesting example of co-evolution of a circRNA, and its host-encoded protein product, that regulate each other's function, to directly impact the fundamental process of neurogenesis.

Correct timing and delicate control of neuronal differentiation is essential for development of a functional nervous system. These events establish a fine-tuned balance between the ability of stem cells to grow/divide and the neuronal progenitors to eventually exit the cell cycle and emerge as mature neurons. A variety of genes become up- or downregulated upon differentiation, giving rise to both neuron-specific proteins and ribonucleic acids (RNAs), including circular RNAs (circRNAs). This class of circRNAs has until recently escaped conventional detection, although these molecules are highly expressed in the mammalian brain. However, the functional roles of brain-expressed circRNAs remain virtually unknown.

In a study spearheaded by postdoc Anne Kruse Hollensen and led by Christian Kroun Damgaard, Ph.D., associate professor of molecular biology and genetics, Aarhus University, thousands of circRNAs were identified when stem cells become differentiated into mature neurons. In a screening for a functional impact to the differentiation process, the authors identified a specific circRNA, circZNF827, which surprisingly "taps the brake" on neurogenesis.

Various biochemical and cell biological assays revealed that circZNF827 mechanistically functions as a scaffold for a complex of RNA-binding proteins, including its own host-gene-encoded protein, ZNF827, and two known transcriptional regulators, hnRNP K and L. Despite being localized mostly to the cell cytoplasm, circZNF827 apparently "moonlights" in the nucleus, where it nucleates these transcription factors to specific neuronal genes (e.g., NGFR), and hence, repress their expression.

The results contribute to the molecular understanding of neurogenesis and in particular how abundant brain-specific circRNAs tap into this fundamental process. 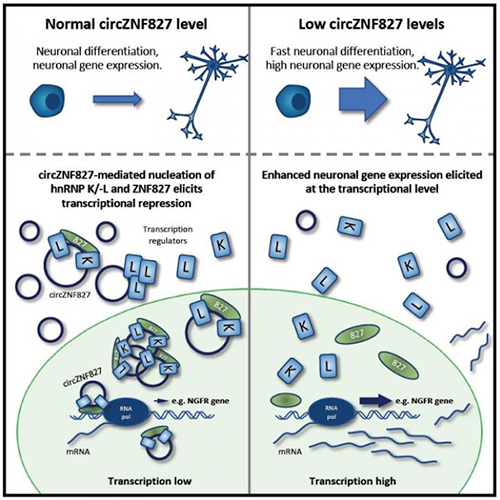