Becoming a nerve cell: timing is of the essence

FLANDERS (BE), August 2020 — Our brains are made up of billions of incredibly diverse neurons. They first arise in the developing brain when stem cells stop self-renewing and differentiate into a particular type of neuron. This process, called neurogenesis, is precisely regulated to give rise to the enormous complex structure that is our brain. It is thought that small differences in the way neural stem cells generate neurons are at the origin of the dramatic increase in the size and complexity of our brain.

To gain insight in this complex process, Pierre Vanderhaeghen, M.D., Ph.D. (VIB-KU Leuven, ULB) and his colleagues examined the mitochondria, small organelles that provide energy in every cell in the body, including the developing brain. They reported their findings recently in Science.

“Diseases caused by defects in mitochondria lead to developmental problems in many organs, in particular the brain,” explained Dr. Vanderhaeghen, a specialist in stem cell and developmental neurobiology. “We used to think that this was related to the crucial function of mitochondria to provide energy to the cells, but this is only part of the story: Recent work in stem cells suggests that mitochondria have a direct influence on organ development. We have tested whether and how this could be the case in the brain.”

Together with his team, he explored whether and how mitochondrial remodeling is coupled with neuronal fate commitment during neurogenesis. “Mitochondria are highly dynamic organelles, that can join together (fusion) or split up (fission), and we know these dynamics are associated with fate changes in various types of stem cells,” Dr. Vanderhaeghen said.

Ryohei Iwata, a postdoctoral researcher in the Vanderhaeghen lab, developed a new method to watch mitochondria in great detail as the neural stem cells are “caught in the act” to become neurons. “We found that shortly after stem cells divide, the mitochondria in daughter cells destined to self-renew will fuse, while those in daughter cells that become neurons show high levels of fission instead,” Dr. Iwata said.

But this was not just a coincidence. Indeed, the researchers could show that increased mitochondrial fission in fact promotes differentiation to a neuronal fate, while mitochondrial fusion after mitosis redirects daughter cells towards self-renewal.

So mitochondrial dynamics are important to become a neuron — but there is more.

“We found that the influence of mitochondrial dynamics on cell fate choice is limited to a very specific time window, right after cell division,” said Pierre Casimir, a Ph.D. student in Dr. Vanderhaeghen’s lab. “Interestingly, the restricted time window is twice as long in humans compared to mice.”

“Previous findings were primarily focused on fate decision of neural stem cells before they divide, but our data reveal that cell fate can be influenced for a much longer period, even after neural stem cell division,” said Dr. Vanderhaeghen. This may have interesting implications in the emerging field of cell reprogramming, where scientists try to convert non-neuronal cells directly in neuronal cells for therapeutic purposes for instance.

“Since this period of plasticity is much longer in human cells compared to mouse cells, it is tempting to speculate that it contributes to the increased self-renewal capacity of human progenitor cells, and thus to the uniquely developed brain and cognitive abilities of our species. It is fascinating to think that mitochondria, small organelles that have evolved in cells more than a billion years ago, might have contributed to the recent evolution of the human brain.” 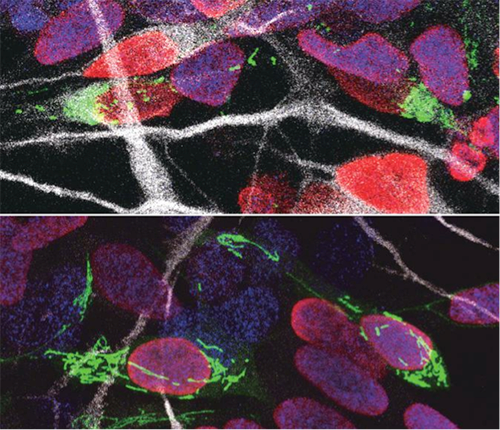