B cells of the immune system discovered in the meninges

MÜNSTER (DE), September 2021 — The brain holds numerous unsolved medical mysteries. Only a few years ago it was discovered that the outer layer of the meninges is interlaced with lymphatic vessels. As these vessels are known to transport immune cells – the white blood cells – this finding has increasingly brought into focus that the meninges contain unexpectedly large numbers of these cells, which are part of the body’s defense system. So apparently, the meninges and the cerebrospinal fluid (CSF), which form a sac in which the brain and spinal cord “swim,” not only protect the brain from external influences such as trauma, but probably also play an important role in inflammation of the brain.

Scientists at the University of Münster, Germany, have now systematically investigated exactly which immune cells populate the meninges and the cerebrospinal fluid in healthy conditions.

“We systematically scanned the brain tissue for immune cells and analyzed which cell types are present in which quantity in the different parts of the tissue,” explained Gerd Meyer zu Hörste, M.D., Ph.D., neurologist and head of the study. As human samples of healthy brain tissue are not available in sufficient quantities to obtain statistically meaningful results in such a screening, the scientists primarily worked with tissues from mice and rats. They found that different types of white blood cells – the T and B cells, natural killer cells, scavenger cells and granulocytes, and their subtypes – are present in different and very specific compositions in the meninges and the cerebrospinal fluid. They also showed that different genes are active in the same cell types depending on which tissue they are located in – meaning that the cells obviously perform different functions there.

The scientists were surprised to find large numbers of B cells and their immature progenitors in the outer layer of the meninges – the dura mater, or dura. Importantly, they were able to confirm this finding in targeted studies in human tissue. “The fact that this cell type resides and probably even develops in the dura suggests that it fulfils a special immune system function there,” said Dr. Meyer zu Hörste. He adds that if further studies can identify in which diseases this occurs and how, these cells may offer a new target in the fight against these diseases.

Capturing the active genes in every single immune cell

In order to identify the immune cells in the tissue, the scientists labelled specific proteins that are present on the surface of all immune cells using an antibody. They then isolated as many immune cells as possible from the tissue and analyzed them using a specialized method, RNA sequencing at the single-cell level. This technique identifies which genes are active in each individual cell in the sample.

RNA (ribonucleic acid) is a copy of the genetic information that is stored by the DNA in the cell nucleus and transports it from the cell nucleus into the cell plasma. Once it arrives in the cell plasma, the RNA provides a construction plan for the production of proteins which, in turn, work within the cell to perform the specific functions appropriate to the different cell types. The RNA can, therefore, be used to determine which of a cell’s genes are active – in technical jargon this is called gene expression – and what properties the cell has. With the help of computers, the individual tissue cells can then be sorted according to similarity and classified into different cell types.

“The analysis at the individual cell level has decisive advantages over conventional RNA sequencing and other methods,” explained David Schafflick, a doctoral student in biology. “With the other methods, you always analyze a mixture of genes from multiple cells, and in some cases, you must know the genes to be analyzed in advance.” He compares this to trying to taste the exact composition of a smoothie: Tasting all the ingredients out of a slug of smoothie is difficult, and you can only taste ingredients that you know before. Determining the exact quantity in which they are present is almost impossible.

In this study, the scientists didn’t look at the pre-mixed smoothie, so to speak, but at the basket of fruit – at each individual cell. “This was the only reason we found the B-cell progenitors in the dura, because this cell type wouldn’t have been expected outside the bone marrow,” Schafflick said.

B cells are a subclass of white blood cells that produce antibodies to fight pathogens and drive inflammatory responses in the body. The scientists discovered that there were significantly more of these cells located in the outer layer of the meninges than in the other tissues tested. Time-course analyses showed that the cells stayed in the tissue for an unusually long time and did not patrol the bloodstream, as immune cells typically do.

“We were even more surprised by the fact that the meninges also contained the progenitors of B cells – in other words, immune cells that were not yet fully developed,” recounted Schafflick.

The scientists were able to show that the cells did not enter the dura via the blood. Therefore, they suspect that such cells form in the bone marrow in the adjacent skull bones and migrate directly into the dura. Moreover, they didn’t find progenitors of any other immune cell types there, which suggests that this is a special mechanism unique to B cells.

To test whether, in principle, the B cells in the dura might play a role in inflammatory diseases, the scientists examined whether they underwent any changes in mice with an autoimmune disease. They were able to show that the cells responded to inflammation of the brain and specialized to produce antibodies.

The research team from Münster, Germany, published their work in Nature Neuroscience. Just a few weeks earlier – while the study was already being prepared for release by the publisher – researchers from the U.S. also reported in Science that they had found B cells and their progenitor cells in the dura.

“The fact that we made almost identical findings independently of each other and with minor methodological differences shows that our results are most likely true and that it is worthwhile continuing to work with this knowledge,” Dr. Meyer zu Hörste said. “Our observations suggest that the cells proliferate in the dura, to some extent, independently of those from the bone marrow and that a proportion of the developed B cells subsequently reside in the dura instead of leaving it directly.”

He added that, in contrast, the colleagues in the U.S. found hints that these cell progenitors basically develop in the bone marrow and only make a brief “stopover” in the dura to complete their development and specialize. Further investigations will now have to determine which hypothesis is confirmed. 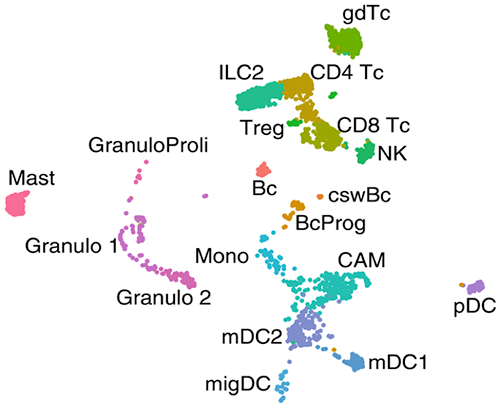 Different types of white blood cells found in the outer layer of the meninges of mice. Examining around 3,000 cells, scientists analyzed which genes are active in every single cell and identified 19 different cell types. One dot corresponds to an individual cell. The closer the dots are to each other, the more similarities there are between the cells. About 1,700 active genes were detected per cell. Image courtesy of Schafflick D, Wolbert J, Heming M et al./Nat Neurosci 2021.