3D Atlas of the Bone Marrow — in Single Cell Resolution

HEIDELBERG (DE), December 2019 — Stem cells located in the bone marrow generate and control the production of blood and immune cells. Researchers have now developed new methods to reveal the three-dimensional organization of the bone marrow at the single cell level. Using this approach, the teams have identified previously unknown cell types that create specific local environments required for blood generation from stem cells.

The study, published in Nature Cell Biology, reveals an unexpected complexity of the bone marrow and its microdomains at an unprecedented resolution and provides a novel scientific basis to study blood diseases such as leukemias.

In the published study researchers from European Molecular Biology Laboratory (EMBL), the German Cancer Research Center (DKFZ) and the Heidelberg Institute for Stem Cell Technology and Experimental Medicine* (HI-STEM gGmbH) present new methods permitting the characterization of complex organs. The team focused their research on the murine bone marrow, as it harbors blood stem cells that are responsible for life-long blood production. Because of the ability to influence stem cells and to sustain blood production, there is a growing interest in exploiting the bone marrow environment, also called niche, as a target for novel leukemia treatments.

"So far, very little was known about how different cells are organized within the bone marrow and how they interact to maintain blood stem cells," explained Chiara Baccin, post-doc in the Steinmetz Group at EMBL.

"Our approach unveils the cellular composition, the three-dimensional organization and the intercellular communication in the bone marrow, a tissue that has thus far been difficult to study using conventional methods," further explained Jude Al-Sabah, Ph.D. student in the Haas Group at HI-STEM and DKFZ.

In order to understand which cells can be found in the bone marrow, where they are localized and how they might impact stem cells, the researchers combined single-cell and spatial transcriptomics with novel computational methods. By analyzing the RNA content of individual bone marrow cells, the team identified 32 different cell types, including extremely rare and previously unknown cell types.

"We believe that these rare 'niche cells' establish unique environments in the bone marrow that are required for stem cell function and production of new blood and immune cells," explained Simon Haas, Ph.D., group leader at the DKFZ and HI-STEM, and one of the initiators of the study.

Using novel computational methods, the researchers were not only able to determine the organization of the different cell types in the bone marrow in 3D, but could also predict their cellular interactions and communication. "It's the first evidence that spatial interactions in a tissue can be deduced computationally on the basis of genomic data," explained Lars Velten, Ph.D., staff scientist in the Steinmetz Group.

"Our dataset is publicly accessible to any laboratory in the world and it could be instrumental in refining in vivo studies," said Lars Steinmetz, Ph.D., group leader and director of the Life Science Alliance at EMBL Heidelberg. The data, which is now already used by different teams all over the world, is accessible via a user-friendly web app.

The developed methods can in principle be used to analyze the 3D organization of any organ at the single cell level. "Our approach is widely applicable and could also be used to study the complex pathology of human diseases such as anemia or leukemia," said Andreas Trumpp, Ph.D., managing director of HI-STEM and division head at DKFZ. 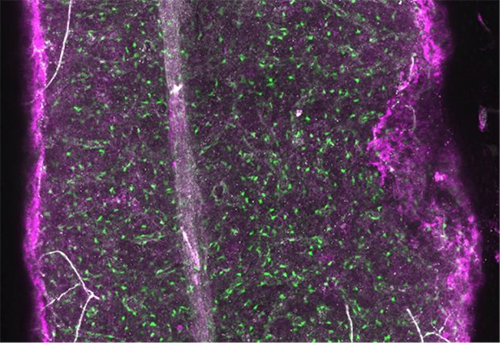 A whole-mount image from a mouse femur. Image courtesy of Baccin et al./DKFZ/EMBL.