Review of “LncRNA‐OG Promotes the Osteogenic Differentiation of Bone Marrow‐Derived Mesenchymal Stem Cells Under the Regulation of hnRNPK” from STEM CELLS by Stuart P. Atkinson

A fuller appreciation of the complex mechanisms controlling bone formation by bone marrow-derived mesenchymal stem cells (MSCs) may aid our understanding of the development of diseases such as ankylosing spondylitis and osteoarthritis [1, 2] and permit the elaboration of novel therapeutic approaches. As a step towards this lofty goal, researchers from the laboratory of Huiyong Shen and Yanfeng Wu (Sun Yat‐sen University, Guangzhou, Guangdong, China) analyzed long noncoding RNA (lncRNA) expression profiles during the osteogenic differentiation of BM‐MSC [3]. Now Tang et al. return with a STEM CELLS article [4] that reveals a novel lncRNA linked to the osteogenesis of BM-MSCs and describes the crucial interaction of this lncRNA with heterogeneous nuclear ribonucleoprotein K (hnRNPK) [5, 6].

Employing customized microarrays, the authors analyzed lncRNA expression profiles in BM-MSCs before and ten days after osteogenic induction, discovering the differential regulation of over a thousand lncRNAs. Of the roughly 300 lncRNAs whose expression rose during osteogenic differentiation, the authors chose to focus on a novel lncRNA, which they christened lncRNA‐OG (gene symbol RP11‐54A9.1).

Silencing and overexpression studies in BM-MSCs confirmed the osteogenic influence of lncRNA‐OG, which the authors discovered derived from the ability of lncRNA‐OG to interact with hnRNPK and stabilize its molecular structure and then influence the activation of the bone morphogenetic protein (BMP) signaling pathway. Additionally, the study also established that hnRNPK, either simultaneously or successively, promoted the transcription of lncRNA‐OG by creating a more permissive chromatin environment surrounding promoter regions of the lncRNA locus.

Overall, these data describe a novel functional osteogenesis‐associated lncRNA that may represent a valuable target for clinical applications in patients suffering from bone-related diseases such as ankylosing spondylitis and osteoarthritis. The authors aim to continue their studies of BM-MSC osteogenesis by dissecting the mechanism by which lncRNA‐OG interacts with hnRNPK to regulate downstream genes.

For more on the osteogenic potential of BM-MSCs and the crucial role of lncRNAs, stay tuned to the Stem Cells Portal! 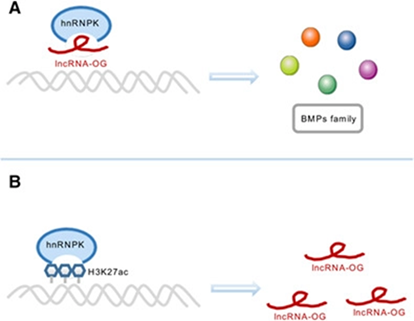