Arising as a life-threating complication of infection, the pathogenesis of sepsis involves a sustained inflammatory response with associated tissue damage and immune suppression [1, 2]. While this often-fatal condition currently lacks adequate therapeutic approaches that may drive improvement in patient outcomes [3], the emergence of mesenchymal stem cell (MSC) therapy [4] has provided some hope to the multitude of patients worldwide, given the innate capacity of MSCs to modulate host immune responses and their low inherent immunogenicity.

Researchers from the laboratory of Desirée Perlee (University of Amsterdam, The Netherlands) sought to develop a new and efficient MSC-based therapy to fight sepsis, and their new study in STEM CELLS sought to evaluate the effect of intravenous infusion of allogeneic adipose-derived MSCs (ASCs) on early inflammatory responses in a randomized, single-blind, parallel group, placebo-controlled trial [5]. To do this, the authors employed a well-characterized model of human inflammation: the intravenous injection of purified lipopolysaccharide (LPS - a component of the outer membrane of Gram-negative bacteria) into healthy human subjects [6].

Here are the details of this exciting new trial:

The authors highlight their trial as the first to report on MSC therapy in a well-established model of systemic inflammation, and they now aim to undertake further testing in sepsis patients to assess safety and efficacy, to understand the effects on the host response during sepsis, and to delineate mechanisms of action.

For more on MSC therapy and more new approaches for the sepsis treatment, stay tuned to the Stem Cells Portal! 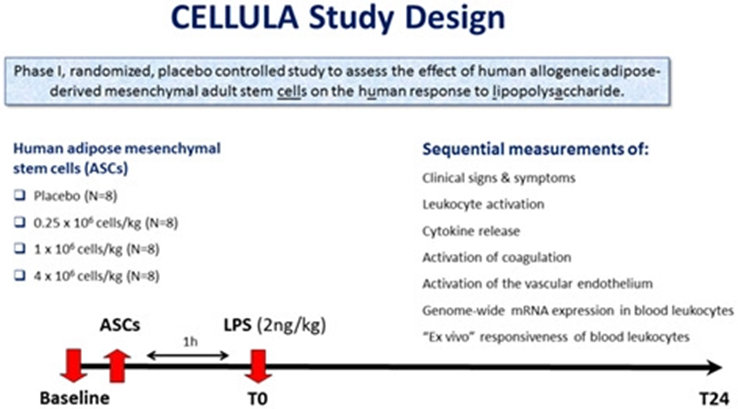