Treating Neonatal Lung Injury via the Intranasal Administration of MSCs

We currently lack adequate treatment options for the lung disease bronchopulmonary dysplasia, which represents the most common cause of death in premature neonates. Given their immunomodulatory capabilities and ability to restore function and lung epithelial/endothelial integrity [1, 2], multiple preclinical studies have evaluated the therapeutic potential of the intratracheal or intravenous administration of mesenchymal stem cells (MSCs) in neonatal lung injury in animal models [3].

Now, researchers from the laboratory of Alvaro Moreira (University of Texas, San Antonio, T, USA) sought to further advance this therapeutic strategy by evaluating the feasibility of intranasal delivery of human umbilical cord tissue MSCs to neonatal rat pups as a clinically relevant and non-invasive approach to deliver multiple doses and the potential of this approach to attenuate lung injury in experimental bronchopulmonary dysplasia. These findings, reported in STEM CELLS Translational Medicine, provide evidence of the potential relevance of intranasal delivery of umbilical cord MSCs in the treatment of human patients in the future [4].

Overall, the authors demonstrate that the intranasal administration of human umbilical cord tissue MSCs represents a feasible and effective means to restore lung alveolar growth and vascular development in a rat model of bronchopulmonary dysplasia. The authors hope that further evaluations will allow the intranasal delivery of MSCs to be employed separately or as an adjunct/alternative to other routes as an advanced treatment option for premature neonates.

For more on MSC-based treatments for neonatal lung injury, stay tuned to the Stem Cells Portal! 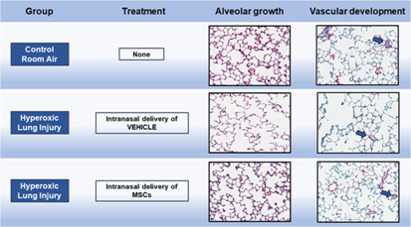