Towards a Characterization of Cultured Cardiac Interstitial Cell Adaptability

Dynamic interactions between cardiomyocytes and cardiac interstitial cells (CICs), a heterogeneous collection of cell types that adapt in response to developmental processes, aging, acute injury, and chronic stress [1-3], help to maintain myocardial homeostasis and mediate responses to damage or stress. While several in vitro-expanded stem/progenitor-like CIC populations have been studied with regards to their cardioprotective and reparative properties following transplantation into the injured myocardium [4, 5], we currently lack a full appreciation of how in vitro culture can affect their therapeutic potential. In general, CICs display marginal retention and poor survival following injection into adult myocardial tissue, which has hampered their evaluation.

Researchers led by Mark A. Sussman (San Diego State University, San Diego, CA, USA) previously found that short-term culture under standard two-dimensional conditions led to a loss of cell‐specific identity markers and an increase in the homogeneity of a c-Kit-expressing stem/progenitor-like CIC subpopulation [6]. Now, the team has evaluated how culture-adapted c-Kit-expressing CICs adapt following their transplantation into different myocardiogenic microenvironments during mouse embryo development [1, 7]. Their fascinating results, published recently in STEM CELLS Translational Medicine [8], implicate in vitro expansion as a primary determining factor in CIC adaptability but also highlight a role for the host tissue microenvironment.

Wang et al. studied the adoptive transfer of in vitro-expanded CICs, characterized as mesodermal cells with characteristic fibroblast‐associated marker expression, into the early cardiogenic environments of the embryonic, fetal, and early postnatal developing heart, which represented a permissive environment for retention, persistence, and phenotypic evaluation.

Following introduction into the embryonic blastocyst environment, CICs failed to participate in embryonic chimerism. Still, they did possess sufficient functional capacity for extra‐embryonic tissue integration, thereby demonstrating the blastocyst as a permissive environment for investigations into the biological adaptation of CICs. The introduction of CICs into the fetal myocardium led to perivascular engraftment of CICs, while the introduction of CICs into the postnatal heart led to persistence for around four weeks without negligible impairment of myocardial structure or function, at which point the maturing host immune response prompts their removal. The prolonged persistence of CICs in the developing myocardial environment revealed several novel biological adaptation mechanisms from both the donated CICs and host tissue; however, CICs maintained a fibroblast‐like phenotype and failed to contribute directly toward cardiogenesis, suggesting their negligible adaptability and functional plasticity.

The authors conclude that in vitro-expanded CICs may have a limited therapeutic potential, with the host tissue microenvironment playing a strong influencing role on final cell fate; however, they do highlight the neonatal heart as a potential in vivo platform for the assessment of CIC activity and their interaction with the host myocardium.

For more on cardiac interstitial cells and stem cell therapies for the injured heart, stay tuned to the Stem Cells Portal! 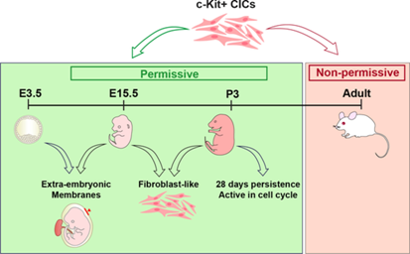