A Step Towards Diaphragmatic Regeneration with Engineered Muscle Constructs

Review of “Generation of a Functioning and Self-Renewing Diaphragmatic Muscle Construct” from STEM CELLS Translational Medicine by Stuart P. Atkinson

Researchers from the laboratories of Martina Piccoli and Michela Pozzobon (Istituto di Ricerca Pediatrica Città della Speranza, Padova, Italy) recently reported that an extracellular matrix (ECM) biologic scaffold obtained from decellularized mouse diaphragm recruited host muscle precursor cells (MPCs) when implanted into a mouse model [1]. As this scaffold displayed many of the properties of the native diaphragm [2], a complex muscle organ that supports respiration, the researchers believed that seeding such an ECM scaffold with human MPCs [3, 4] may allow the in vitro generation of a diaphragmatic muscle construct that can be potentially transplanted to treat diaphragm tissue damage.

To this end, the team now report their recent findings in STEM CELLS Translational Medicine, describing how the construction of a functional engineered diaphragmatic muscle construct maintained by a stem cell pool may represent a promising tool toward future clinical applications in diaphragmatic regeneration [5].

Trevisan et al. first assessed a range of storage conditions to develop a means to preserve decellularized diaphragmatic ECM scaffolds in the long-term while still being ready-to-use, so at to adhere to requirements for future clinical application. In general, storage at 4 degrees Celcius in phosphate‐buffered saline in the presence of antibiotics provided better outcomes than storage in liquid nitrogen.

Following this step, the authors then injected the stored ECM scaffold with pediatric human MPCs derived from muscle biopsies, where they engrafted, proliferated, and differentiated during subsequent in vitro culture to give rise to an engineered diaphragmatic muscle construct. Gene expression analysis revealed the robust and temporally appropriate expression of functional skeletal muscle markers, while the number of PAX7 expressing stem cells remained constant over time, suggesting stem cell pool maintenance within the construct. The authors also provided evidence for construct functionality, as the myotubes present in the contract responded to ATP stimulation with a fast and synchronous transient in cytosolic calcium concentration. Furthermore, the authors observed the ability of the construct to activate a regenerative response following exposure to cardiotoxin injury that prompted matrix remodeling and the activation, proliferation, and differentiation of engrafted human MPCs, thereby confirming the presence of a functional stem cell pool preserving physiological features.

The authors believe that the development of a functional diaphragmatic muscle construct maintained by a stem cell pool represents a promising tool toward future clinical applications in diaphragmatic regeneration and in vitro drug testing and screening; however, the clinical use of diaphragmatic muscle constructs in human patients will require further development and rigorous testing. The next steps include the application of autologous MPCs within a storable biological scaffold deprived of antigenic response, the optimization of cell engraftment, the addition of other relevant cell types (such as macrophages, endothelial cells, and neural cells), and the testing of constructs in diaphragmatic hernia repair.

For all the developments in stem cell-seeded ECM scaffolds and muscle repair, stay tuned to the Stem Cells Portal! 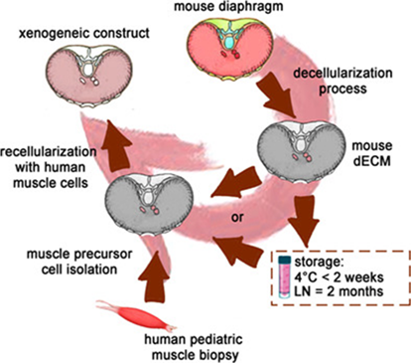