Stem Cell-derived Exosomes – A New Therapeutic Option for a Common Cause of Back Pain?

A recent study from researchers led by MingHan Liu, Yue Zhou, and Zhiqiang Tian (Army Medical University, Chongqing, China) sought to gain mechanistic insight into the development of intervertebral disc degeneration by exploring a potential role for CESC‐derived exosomes and their ability to modulate autophagic flux [6]. In their new STEM CELLS article [7], Luo et al. now describe how exosomes derived from healthy CESCs may represent an exciting therapeutic approach to the prevention of intervertebral disc degeneration and the onset of lower back pain.

For more on how stem cell-derived exosomes may represent an effective treatment for the causes of lower back pain, stay tuned to the Stem Cells Portal! 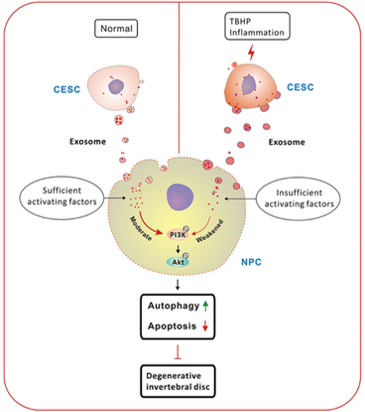