The targeting of stem cells to secondary lymphoid organs (SLOs), which include the spleen, lymphoid nodes, mesenteric lymphoid nodes, and Peyer's Patches, may allow for enhanced tolerance induction [3], and a recent study from the research group of Yan Han (First Medical Centre of Chinese PLA General Hospital) and Hong Li (Beijing Institute of Pharmacology and Toxicology, Beijing, China) revealed that the forced expression of the chemokine receptor CCR7 enhanced the migration of MSCs to mouse SLOs and potently enhanced their immunoregulatory capacity [4].

Now, the team returns with their new STEM CELLS study [5], in which they describe how the transfusion of CCR7-overexpressing human ASCs leads to enhanced migration to SLOs and an increased immunomodulatory effect in a rat allogeneic VCA model. Overall, the authors hope that their new findings will enhance the therapeutic potential of hASCs in the treatment of allogeneic and autogenic immune diseases.

Ma et al. began their study by engineering ASCs to overexpress a CCR7/GFP expression cassette via lentiviral infection; they discovered that while CCR7-overexpressing ASCs maintained their multi‐differentiation potential and immunoregulatory ability, they gained the ability to migrate in response to CCR7 ligands in vitro. Of note, this additional ability allowed engineered ASCs to migrate to T cell-enriched locations within SLOs following their intravenous infusion in rats, suggesting an increase in their ability to inhibit T‐cell activation, proliferation, and their subsequent emigration and cytotoxicity in the grafted peripheral tissue.

Encouragingly, the authors discovered that the infusion of CCR7-overexpressing ASCs, but not unmodified ASCs, prolonged graft survival time in a rat model of VCA, thanks to the presumed altered axis of Th1/Th2 and Tregs/Th17 in SLOs, as well as the inhibited expression of proteins involved in cytokinesis, lymphocyte proliferation, differentiation and apoptosis in splenic T lymphocytes. Furthermore, infusions of CCR7-overexpressing ASCs ameliorated associated pathogenic alterations and modulated the expression of inflammatory cytokines in the peripheral blood.

Given their encouraging findings, the authors propose forced CCR7 expression as a strategy to target therapeutic agents to SLOs to elicit potent immunomodulatory effects to improve the efficacy of human ASC-based therapies for allogeneic and autogenic immune disease.

For more on the power of targeted adipose-derived stem cells as an immunomodulatory force, stay tuned to the Stem Cells Portal! 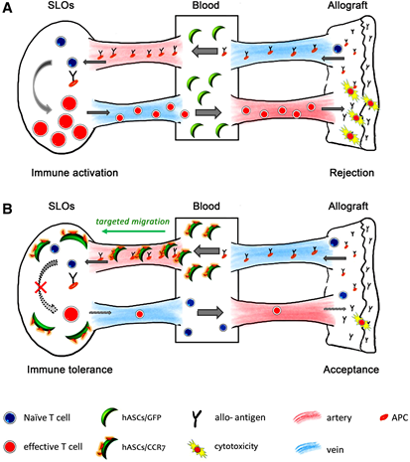