Given these findings, Abu‐Khader et al. set out to delineate the crucial factors involved in the improvement of platelet engraftment activity of expanded umbilical cord blood progenitors by OCM, and their new STEM CELLS study now establishes the overarching importance of insulin‐like growth factor signaling and the subsequent activation of transcriptional activation complexes [5].

While providing for a deeper understanding of the paracrine regulatory activities of osteoblasts on progenitor cells of the hematopoietic system, the identification of regulatory mechanisms such as the IGF2-IGF1R-β‐catenin axis may also lead to the development of strategies to improve the platelet engraftment activity of ex vivo expanded stem and progenitor cells for transplantation purposes.

For more on new approaches to improve the applicability of umbilical cord blood stem and progenitor cells, stay tuned to the Stem Cells Portal! 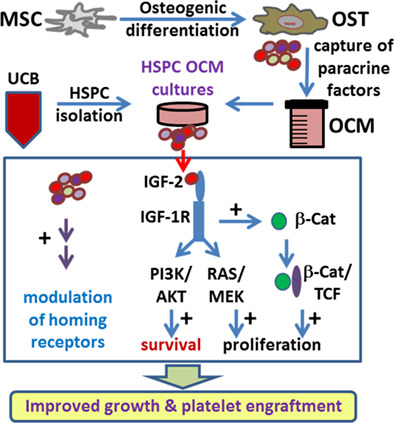