The authors first confirmed that CVPCs secreted elevated levels of NT‐3 and improved cardiac function and fibrotic scar formation concomitant with reduced cardiomyocyte death and increased angiogenesis after their implantation into the infarcted mouse heart at the beginning of reperfusion following an hour of ischemia. Further detailed analysis of the role of NT-3 revealed that an injection of human recombinant NT‐3 mimicked the effect of CVPCs, while an NT‐3 neutralizing antibody inhibited any cardioreparative effect of CVPCs. Interestingly, the study also discovered both the expression of NT‐3 by mouse adult cardiomyocytes (described for the first time) and an increase in NT-3 basal levels following myocardial infarction; additionally, the knockdown of endogenous NT‐3 worsened myocardial injury.

Overall, these fascinating findings provide robust evidence for the crucial role of the neurotrophin family in repairing the infarcted heart and provide a platform for developing a safe and efficient cell free-approach to the treatment of myocardial infarction-associated injuries.

For more on the crucial role of Neurotrophin-3 in the infarcted heart, stay tuned to the Stem Cells Portal! 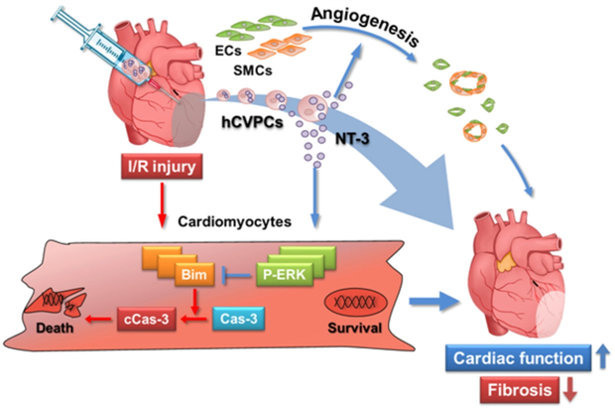