Review of “Perivascular osteoprogenitors are associated with trans-cortical channels of long bones” from STEM CELLS by Stuart P. Atkinson

Bone development and regeneration depend on microenvironmental signaling to stem/progenitor cells that may reside in a perivascular niche [1]; however, we currently lack generally accepted markers for these cells that would permit the confirmation of their location and their characterization. A previous STEM CELLS article from the laboratory of Ivo Kalajzic (UConn Health, Farmington, CT, USA) had established that quiescent bone lining cells and late osteoblasts express high levels of Dentin matrix protein 1 (DMP1), an acidic osteocyte phosphoprotein [2]. Their subsequent studies using a constitutively active DMP1‐Cre reporter also suggested that DMP1-expressing cells within the cortical bone displayed osteoprogenitor-like characteristics and that some late osteoblast/preosteocyte cell lines exhibited an unexpected plasticity/bone formation capacity [3]. Overall, this provided evidence for the existence of a non-osteocytic perivascular osteoprogenitor population within the cortical bone.

The team now return in a new STEM CELLS [4] article, in which they describe the implementation of a mouse model engineered to express an inducible DMP1-reporter construct [5] to identify osteoprogenitors and a Collagen 1a1-reporter construct that labels osteoblasts/osteocytes [6] and allows them to be discounted from the analysis. Fascinatingly, Root et al. now report that their refined cell identification strategy has been able to identify a novel population of non-osteocytic perivascular osteoprogenitors with the ability to regenerate cortical bone tissues.

The fluorescent reporter-based analysis of DMP-1 expressing and Collagen 1a1-negative cells within the cortical bones of mice provided evidence that a novel population of osteoprogenitors, distinct from DMP1-expressing Collagen 1a1-positive osteocytic cells, lay in a perivascular location within the transcortical channels. Subsequent ex vivo fourteen‐day bone outgrowth cultures used to examine progenitor-like potential revealed that the newly identified osteoprogenitors possessed the ability to migrate out of transcortical channels to the culture plate where they expressed a range of stem cell markers. Finally, a cortical bone transplantation model established that these novel osteoprogenitors migrated from their cortical bone perivascular niche, expanded, and then differentiated into osteoblasts, thereby prompting the reconstitution of the bone marrow cavity and the formation of new bone.

While studies have previously identified mesenchymal stem cells and osteoprogenitors that associate with the vasculature within the bone marrow, this study represents the first description of cortical bone osteoprogenitor that serves to provide new osteoblasts for intracortical bone tissue remodeling. Of significant note, further in-depth analysis of transcortical perivascular osteoprogenitors may offer unique insight into cortical bone remodeling and allow for the development of therapeutic approaches that efficiently increase bone mass.

For all the details on these novel osteoprogenitors and their potential application in bone repair strategies, stay tuned to the Stem Cells Portal! 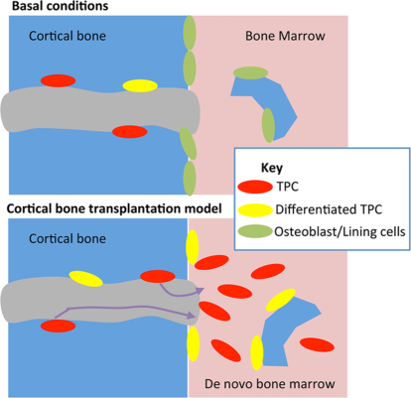