In their recent STEM CELLS article [1], researchers led by Ingrid G Winkler and Joshua Tay (University of Queensland, Woolloongabba, QLD, Australia) report on their exploration of the differential expression of niche factors supporting the maintenance and activity of hematopoietic stem cells (HSCs) when comparing the bone marrow and the endosteum (the ~twelve-cell diameter from the bone/bone marrow interface) [2-4]. Studies have suggested that HSCs from the endosteum possess more significant long-term competitive repopulation potential than bone marrow-derived HSCs [5, 6] (See the STEM CELLS article for more!), suggesting the existence of tissue-specific niche-derived factors.

Tay et al. searched for novel HSC niche factors by comparing gene expression in endosteal cells and the bone marrow from the femur. Interestingly, this revealed the enriched expression of known HSC supporting factors, such as KITL and CXCL12 in the endosteal compartment, but also the elevated expression of prostacyclin/prostaglandin I2 (PGI2) synthase (PTGIS).

As PGI2 had yet to be described as a regulator of hematopoiesis and HSCs, the authors employed stable analogs of PGI2 to investigate the role of PGI2 in HSC regulation in the endosteal bone marrow niche. Of note, prostacyclin analogs have been safely clinically employed for vascular diseases and can therefore be swiftly repurposed for other therapeutic uses [7]. Their subsequent analysis revealed that the in-vitro treatment of HSCs with PGI2 analogs induced self-renewal and reduced differentiation, which the authors linked to increased signal transducer and activator of transcription 3 (STAT3) signaling and potential alterations in cellular metabolism; furthermore, ex-vivo pulse-treated HSCs displayed long-term competitive repopulation activity after transplantation without having a significant impact on proliferation.

The identification of PGI2 as an HSC-supportive endosteal bone marrow-associated factor that functions at both the cell-intrinsic (via direct intracellular signaling) and cell-extrinsic (niche mediated) level may foster the development of new therapies to support HSC engraftment after autologous transplantation and protect HSCs in patients undergoing radiation or chemotherapy treatment for non-hematologic malignancies.

For more on HSCs, the stem cell niche, and the future exploration of the therapeutic potential of PGI2, stay tuned to the Stem Cells Portal! 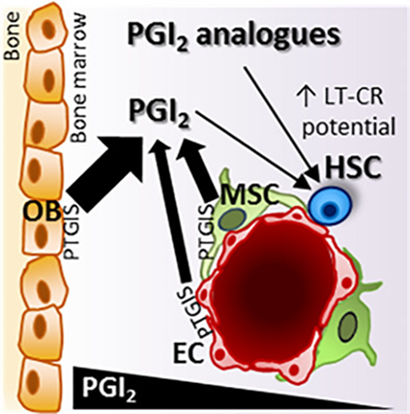