Although the subventricular zone of the postnatal lateral ventricle represents the primary source of olfactory bulb interneurons, a range of studies has claimed that local neural stem cells (NSCs) exist in the adult rodent and human olfactory bulb. These studies have been supported by research that described the generation of neurons and glia from human olfactory bulb cells during in vitro culture [1-6] (See the STEM CELLS article here!).

The authors began by injecting fluorescently-labeled retroviruses into the olfactory bulb core of adult mice – this approach labels any dividing cells and tracks the differentiation/maturation of any subsequently generated neurons. While fluorescently-labeled cells also expressed markers of adult NSCs soon after injection (up to three days), the abundance of fluorescent cells co-expressing doublecortin (DCX - a marker of neuroblasts and immature neurons) steadily increased over seven days. Additionally, the presumed olfactory bulb NSCs also gave rise to NeuN-positive neurons that then began to express markers of olfactory bulb neuron subtypes; however, the authors noted that interneurons expressing calretinin (a calcium-binding protein) represented the most abundant cell type generated.

Of particular note, tracking NSCs and neurons from the subventricular zone using the same labeling strategy revealed the presence of slowly dividing label-retaining cells that may represent resident NSCs; however, the post-mitotic nature of the vast majority of cells that eventually reached the olfactory bulb core strongly suggested that proliferating cells of the olfactory bulb do not derive from the subventricular zone.

Overall, this exciting in vivo study strongly suggests that NSCs within the mouse olfactory bulb contribute to the generation of neurons that incorporate themselves into the olfactory bulb circuitry. The authors note that future studies may include the determination of whether the presumed human olfactory bulb-derived NSCs react to pathological or physiological stimulation and generate functional interneurons to extend their research.

For more on the characteristics and activity of olfactory bulb neural stem cells, stay tuned to the Stem Cells Portal! 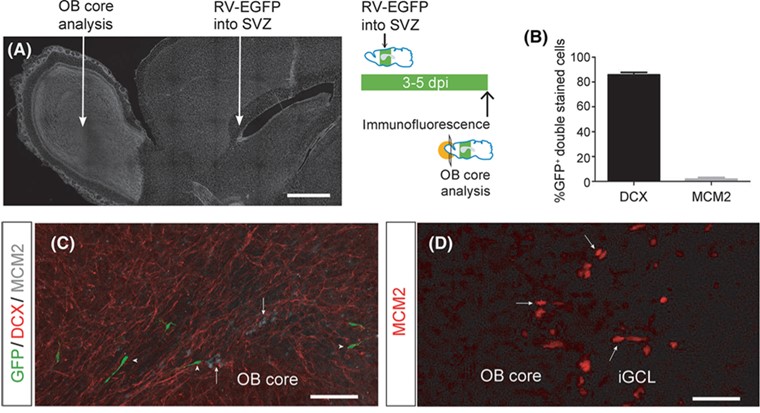