The ectodermal differentiation of human pluripotent stem cells (PSCs) represents the starting point in the generation of neural cells for disease modeling, drug discovery, and regenerative therapies. Unfortunately, the initial stages of traditional differentiation protocols can last for nearly two weeks, thereby severely hampering research aims [1]; however, research has suggested the possibility of significantly shortening this time and hastening the in vitro production of a range of neuronal cells types [2, 3].

The authors attempted to accelerate the early embryonic fate decisions occurring between pluripotency and ectoderm formation, given its broad applicability to neural differentiation. To do this, the authors aimed to avoid the prolonged passive acquisition of ectodermal fate by disrupting the self-renewal of human PSCs via the inhibition of growth factor-associated pathways [5, 6] (See the STEM CELLS article for more!).

The authors highlight their findings as a “major advance” in the differentiation of human PSCs into neural cells and anticipate that the relative ease and rapidity of their new protocol will remove a significant bottleneck in this research area and significantly impact the generation of human neurons. The next steps noted in this fascinating new study include exploring the terminal maturation of early intermediate ectodermal neural precursors into electrophysiologically functional neurons.

For more on how this new advance may significantly hasten the production of neural cells from human PSCs, stay tuned to the Stem Cells Portal! 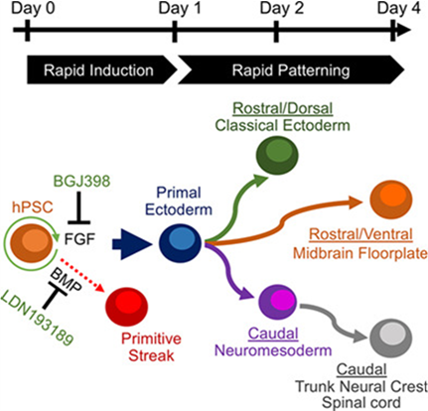