Review of “MMP13 and TIMP1 are functional markers for two different potential modes of action by mesenchymal stem/stromal cells when treating osteoarthritis” from STEM CELLS by Stuart P. Atkinson

Previous studies from the laboratory of Anthony P. Hollander (University of Liverpool, UK) reported on the application of human mesenchymal stem cells (MSCs) as a means to replace lost cartilage tissue through chondrogenic differentiation [1] or the repair damaged cartilage through the secretion of trophic or immunomodulatory factors [2, 3]. (See their previous STEM CELLS and STEM CELLS Translational Medicine articles here!). Interestingly, many studies have suggested that the in vitro and in vivo aging of MSCs leads to a loss of differentiation capacity, which would affect their therapeutic potential; however, we currently lack comparative aging‐related data for the various therapeutic outputs of MSCs

In their new STEM CELLS study [4], the Hollander group report on their recent search for biomarkers for both the chondrogenic and trophic potency of MSCs during extensive in vitro aging. Fascinatingly, Salerno et al. now link low matrix metalloproteinase 13 (MMP13) mRNA expression with a loss of chondrogenic potential and the elevated secretion of tissue inhibitor of metalloproteinases 1 (TIMP‐1) protein with maintained trophic repair in a study that may lead to improved MSC-based therapies for conditions such as osteoarthritis.

An analysis of bone marrow-derived human MSCs demonstrated that chondrogenesis, and tri-lineage differentiation potential in general, represents a transient property of MSCs that significantly declines with age. However, these findings also suggested that repair mediated through the secretion of trophic or immunoregulatory factors remained stable during the aging process, as evidenced by an analysis of meniscal cartilage integration [3] and immunosuppressive activity measured by the inhibition of T‐cell proliferation [5].

Subsequent transcriptomic and proteomic analyses of MSCs during aging highlighted the differential expression of 338 genes and proteins. Ingenuity Pathway Analysis of these changes linked the loss of chondrogenesis with MSC aging with the downregulated expression of cell‐cycle master regulator forkhead box protein M1 (FOXM1) transcription factor pathway and suggested a link between regulators of cell migration and wound healing to the trophic properties of MSCs. Specifically, the study underscored the particular importance of CXCL12 (also called stromal cell‐derived factor 1) to trophic repair, given its consistently elevated expression at both the gene and protein level.

Finally, the authors attempted to establish functional biomarkers of the different therapeutically relevant modes of MSCs that lie outside canonical pathways or gene/protein families. Fascinatingly, they discovered that the loss of MMP13 gene expression correlated with the loss of chondrogenic potential, while the continuous and elevated expression of the TIMP‐1 protein associated with the maintenance of trophic repair.

With these findings in mind, the authors suggest a two-pronged attack on osteoarthritis – the administration of early passage MMP13-expressing, high TIMP1‐secreting MSCs to boost engraftment and chondrogenesis, and then the administration of later passage MMP13 non-expressing, high TIMP1‐secreting MSCs to provide support through trophic repair.

For more on how biomarker identification may improve human MSC-based therapy for conditions such as osteoarthritis, stay tuned to the Stem Cells Portal! 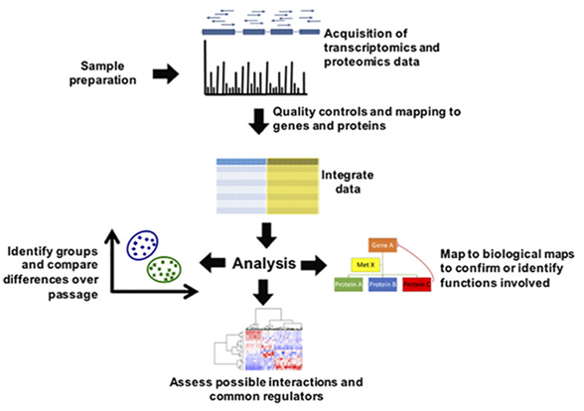