Review of  “Knockdown of formin mDia2 alters lamin B1 levels and increases osteogenesis in stem cells” from STEM CELLS by Stuart P. Atkinson

Previous studies published in STEM CELLS from the laboratory of Janet Rubin (University of North Carolina, Chapel Hill, NC, USA) suggested a critical regulatory role for nuclear actin-lamin cytoskeleton alterations in mesenchymal stem cell (MSC) differentiation [1, 2]. However, the authors also stated that altered cytoplasmic actin integrity due to the transfer of actin into the nucleus might also have some relevance. Now, the team returns with their new STEM CELLS study in which they further probe how more specific alterations to the actin-laminin cytoskeleton can influence MSC differentiation by targeting mDia2, a nuclear-resident protein that can specifically control intranuclear actin polymerization [3]. Overall, Sankaran et al. now report that mDia2 functions to retain MSCs in a multipotent state and also highlight mDia2 as an exciting tool to query the nuclear actin‐lamin nucleoskeletal structure.

In their new study, the authors observed alterations to the nucleoskeletal actin-lamin scaffold and not the cytoplasmic actin cytoskeleton following mDia2 silencing and linked this nucleus-specific effect to the induced differentiation of MSCs. Specifically, mDia2 loss prompted a downregulation of lamin B1 gene expression leading to the loss of both lamin B1 integrity and the association of actin with the lamin B1 nucleoskeleton. This disruption prompted the loss of nuclear envelope structure and integrity, an increase in nuclear height, and a reduction in nuclear stiffness without apparent compensatory changes in other actin nucleation factors.

Alterations to nuclear morphology such as these can alter chromatin organization, gene expression, and hence stem cell fate [4], and the authors employed unbiased RNA-sequencing to highlight that the mDia2 silencing promoted the expression of Runx2-associated genes in MSCs [5]. The upregulation of this osteogenic-associated program then promoted the loss of the multipotent stem-like state and the subsequent robust osteogenic differentiation of MSCs at the expense of adipogenic differentiation.

Overall, the authors provide compelling evidence that the structural arrangement of the nucleoskeleton strongly influences in MSCs lineage commitment and highlight mDia2 as a potent tool for the exploration of intranuclear actin‐lamin nucleoskeletal structure.

For more on how mDia2 links nucleoskeletal disruption to MSC differentiation, stay tuned to the Stem Cells Portal. 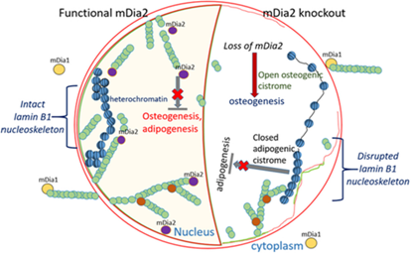