Mouse embryonic stem cells (mESCs) represent the in vitro counterparts of the cells of the pre‐implantation epiblast; therefore, understanding how mESCs self-renew and differentiate may aid our understanding of the fate decisions made during early embryonic development. Typical mESC culture conditions include supplementation with leukemia inhibitory factor (LIF), which induces the activation of the signal transducer and activator of transcription 3 (STAT3) transcription factor through the activity of the Janus Kinases (JAKs) [1]. STAT3 then binds to open chromatin regions at regulatory regions associated with core pluripotent genes [2, 3] to induce their expression [4] and support the pluripotent state of mESCs.

The authors discovered that LIF activation induced the translocation of cytosolic JAK2 into the nucleus of mESCs concomitant with a decrease in DNA methylation, as evidenced by a decrease in 5-methylcytosine levels and an increase in 5-hydroxymethylcytosine levels at the promoters for the Nanog and Oct4 pluripotency-associated genes but not at differentiation-associated genes. The alteration of the chromatin landscape occurred at regions associated with the binding of STAT3, which would thereby support the increased expression of pluripotency-associated genes. The reduction in the levels of repressive histone modifications (trimethylated H3K9 and K27) at similar regions additionally suggested that JAK2 may regulate epigenetic modifiers to allow for LIF-mediated pluripotency. Notably, the pluripotency-inducing effect of LIF disappeared in JAK2-knockout mESCs or following the treatment of wild-type mESCs with a JAK2-specific inhibitor.

Overall, these exciting new findings provide evidence for the role of nuclear JAK2 activity as a crucial mediator of LIF‐induced epigenetic modifications that support the pluripotency of mESCs. Can subsequent research confirm a crucial role for JAK2 during development?

For answers to this question and to discover more regarding the mechanism controlling the epigenetic landscape that supports the pluripotent state of mouse embryonic stem cells, stay tuned to the Stem Cells Portal! 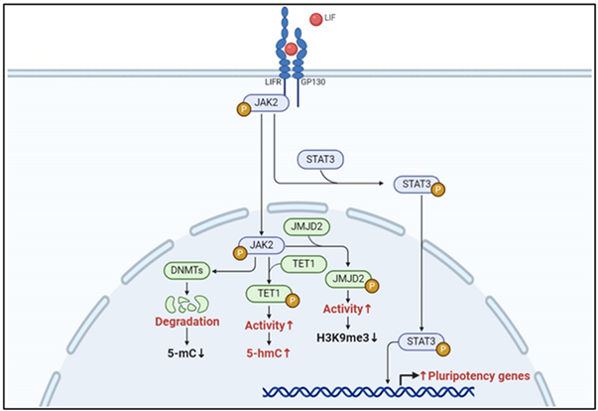