The gas exchange process occurring in the alveoli of the lungs depends on the differentiation of alveolar type II (AT2) into alveolar type I (AT1) cells [1, 2]; the recapitulation of this process in vitro, a difficult task, may provide clues regarding the pathological and physiological roles of human AT1 cells. Researchers led by Shimpei Gotoh (Kyoto University, Japan) previously reported the generation and expansion of human induced pluripotent stem cell (iPSC)‐derived AT2 (iAT2) cells in three-dimensional alveolar organoid culture [3, 4].

Interestingly, a comparison between alveolar organoids generated with and without the aid of fetal lung fibroblasts established the lack of the all-important iAT1 cells in the fibroblast‐free alveolar organoids. Further analysis then suggested that fetal lung fibroblast-dependent modulation of Wnt signaling represented one of the driving forces behind the generation of iAT1 cells from iAT2 cells in fibroblast-dependent alveolar organoids. With this knowledge in hand, the authors then demonstrated the ability to induce iAT1 cell differentiation from iAT2 cells via treatment with an inhibitor of the canonical Wnt signaling pathway.

In the future, the authors hope that the chemically-induced differentiation of iAT2 cells into iAT1 cells within alveolar organoids may serve as a highly utile means to dissect the molecular pathways regulating this all-important process.

For more on human iPSC-derived organoids and their vast potential, stay tuned to the Stem Cells Portal! 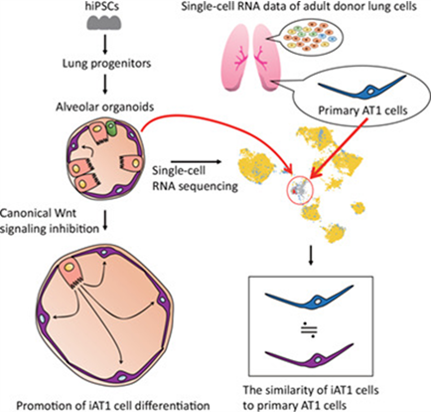