Review of "Endothelial Cells Derived from Patients' Induced Pluripotent Stem Cells for Sustained FVIII Delivery and the Treatment of Hemophilia A" from STEM CELLS Translational Medicine by Stuart P. Atkinson

Mutations in the F8 gene that lead to a deficiency of clotting factor VIII (FVIII) cause hemophilia A, an X‐linked recessive bleeding disorder that can lead to disability and even death due to spontaneous or injury‐caused prolonged bleeding. Factor replacement by repeated infusions of recombinant FVIII protein suffers from multiple challenges, including the risk of infection, inconvenience, expense, and frequent bleeding episodes due to fluctuations of infused factor levels.

Endothelial cells normally express and post-translationally modify FVIII [1, 2], and, therefore, treatment with this cell type has emerged as an alternative therapeutic approach to hemophilia A. As limited availability hinders the clinical application of endothelial cells derived from natural sources, the implementation of cells derived from patient-specific induced pluripotent stem cells (iPSCs) [3, 4] may represent a relevant strategy moving forward.

Now, in a recent STEM CELLS Translational Medicine article, researchers led by Aijun Wang and Ping Zhou (University of California Davis, Sacramento, CA, USA) reported their encouraging findings regarding the implementation of endothelial cells differentiated from patient-specific iPSCs as FVIII delivery vehicles in the treatment of hemophilia A in an animal model [5].

These findings provide evidence for the implementation of endothelial cells derived from patient-specific iPSCs as FVIII delivery vehicles for the treatment of hemophilia A in both adults and newborns and the authors next hope to move to larger animal models to optimize their approach and fully evaluate efficacy and safety.

For more on how endothelial cells derived from patient-specific iPSCs may represent the future of hemophilia A treatment, stay tuned to the Stem Cells Portal! 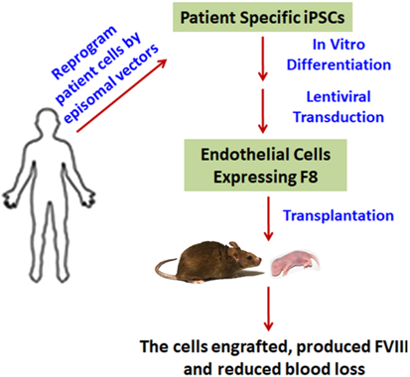