Review of “Activation of the RhoA–YAP–β-catenin Signaling Axis Promotes the Expansion of Inner Ear Progenitor Cells in 3D Culture” from STEM CELLS by Stuart P. Atkinson

Inner ear progenitor cells (IEPCs) can differentiate into the mechanosensory hair cells and surrounding supporting cells required for hearing in mammals [1, 2]; however, hair cells do not automatically regenerate in the adult, and their loss generally results in permanent hearing deficits. In vitro research has moved from IEPC-derived spheroid culture in liquid suspension [3] to three‐dimensional (3D) cell cultures employing the encapsulation within extracellular matrix components (such as Matrigel, which resembles the extracellular environment found in many tissues) to provide the additional microenvironmental cues that regulate stem cell survival, proliferation, differentiation, and migration. Cells cultured under encapsulated 3D conditions sense and adapt to both external forces and the mechanical constraints of the extracellular matrix through mechanotransduction signaling [4].

Recently, researchers led by Wenyan Li and Huawei Li (Fudan University, Shanghai, China) set out to compare the biological behavior of IEPCs grown in liquid suspension to those grown in Matrigel-encapsulated culture conditions in the hope of delineating the basic regulatory principles controlling IEPC biology and fostering the development of strategies to repair/regenerate the auditory sensory cell apparatus. Reporting in their new STEM CELLS article [5], Xia et al. now establish that the Ras homolog family member A (RhoA)-Yes‐associated protein (YAP)-β‐catenin signaling axis senses and transduces mechanical cues from the extracellular matrix to promote the efficient expansion of self-renewing IEPCs.

The authors of this fascinating new study first established that the mechanical cues derived from the interaction of IEPCs and extracellular matrix components improved the survival, self-renewal, and expansion of IEPCs when compared to liquid suspension culture. In these conditions, the lack of interaction with the extracellular matrix led to a reduction in cell viability and proliferation and an increase in IEPC differentiation. Fascinatingly, the team revealed that the mechanical cues deriving from the interaction of IEPCs and the extracellular matrix induced the accumulation of RhoA and the subsequent polymerization and contraction of the actin cytoskeleton [6]. Said alterations then promoted an increase in the nuclear localization of YAP, which subsequently mediated the enhanced proliferation and expansion of IEPCs through the β‐catenin-associated canonical Wnt signaling pathway.

Finally, and perhaps most interestingly, transcriptional profiles derived from IEPCs in Matrigel-encapsulated culture and freshly dissected cochlear epithelium, the source of IEPCs in vivo, displayed broad similarities, as evidenced by similar expression levels of IEPCs marker genes such as Sox9 and Epcam.

Overall, the authors demonstrate that the RhoA‐YAP‐β‐catenin signaling axis in IEPCs transduces any external mechanical signals deriving from the extracellular matrix to regulate cell survival, proliferation, and differentiation. As a consequence, the team suggests that pharmacologically or genetically regulating the function of the RhoA‐YAP‐β‐catenin signaling axis to activate IEPCs may represent a therapeutically relevant approach to hair cell regeneration and the restoration of homeostasis in the cochlear epithelium. 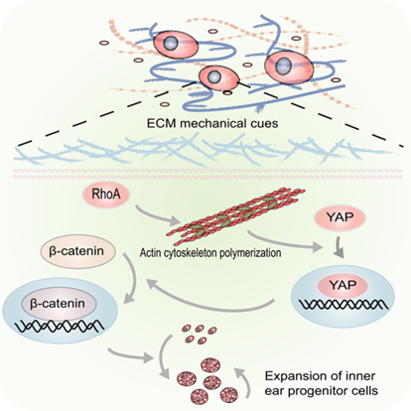