The generation of chondrocytes from human induced pluripotent stem cells (hiPSCs) may provide for the large number of cells required for the creation of novel therapies for conditions involving articular cartilage degeneration, such as arthritis; however, a standardized cell line-independent protocol for chondrogenic differentiation with high efficiency and low variability remains to be described [1].

This problem led researchers from the laboratories of Farshid Guilak (Washington University, St. Louis, Missouri) and Charles A. Gersbach (Duke University, Durham, North Carolina, USA) to combine a rapid and highly reproducible protocol for hiPSC chondrogenesis broadly applicable across various hiPSC lines with a method to purify chondroprogenitors (CPs). In their recent STEM CELLS study [2], Adkar et al. report on how their newly developed step‐wise differentiation protocol in CRISPR/Cas9 engineered hiPSCs may pave the way for the development of in vitro chondrogenesis platforms for regenerative medicine as well as disease modeling and drug screening [3, 4].

The authors monitored gene expression profiles (e.g., MIXL1, MSGN1, and PARAXIS) over time as well as cartilaginous matrix production to develop an efficient month-long chondrogenic differentiation protocol that employed optimized step-wise treatment with multiple growth factors and small molecule inhibitors. During this protocol, differentiating cells passed from pluripotency and through anterior primitive streak, paraxial mesoderm, early somite, and sclerotome stages before developing into supposed CPs that generated high amounts of proteoglycan with round chondrocyte‐like cells within the matrix.

While the authors do note the need for assessments of in vivo osteochondral repair by purified CPs, they believe that their efficient differentiation protocol combined with CRISPR/Cas9-gene edited hiPSCs represents an exciting platform for the development of regenerative approaches for disorders such as arthritis. Indeed, the authors anticipate that the application of this new model system will encourage the identification of additional factors that will improve the chondrogenic differentiation of hiPSCs, further enhance matrix production and therapeutic outcomes, and allow the development of a more rapid, straightforward protocol for the generation of CPs without the need to genetically engineer hiPSCs.

To discover all the future advances in chondrogenesis from hiPSCs and the development of novel therapies for articular cartilage degeneration, stay tuned to the Stem Cells Portal! 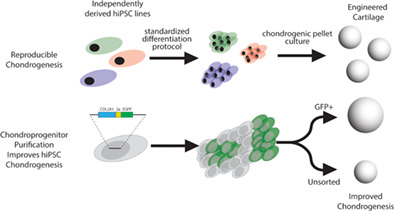