Now, a new STEM CELLS Translational Medicine article from researchers led by Carl Ernst (McGill University and Douglas Hospital Research Institute, Montreal, Quebec, Canada) report on their significantly improved protocol for the generation of ventral midbrain neurons from hiPSCs and their use of techniques such as live calcium imaging and electrophysiology as quality control measures [5]. Overall, the authors believe that their new advance will improve the accuracy of disease modeling/small molecule screening and allow for the more rapid development of cell replacement therapy for ventral midbrain disorders.

The authors then exposed hiPSC-derived ventral midbrain neurons to the BAY‐K8644 L‐type calcium channel agonist for 15 days, which permitted a significant increase in the levels of tyrosine hydroxylase, the rate‐limiting enzyme for dopamine synthesis. As expected, the study also found increased intracellular levels of dopamine and enhanced dopamine release, which the authors suggest derives from a BAY‐K8644-mediated strengthening of cell-to-cell connectivity that permitted the immediate influx of calcium to coincide in all cells [6].

Overall, the authors describe how a few simple modifications can enhance the differentiation of hiPSCs into ventral midbrain neurons expressing elevated levels of tyrosine hydroxylase and dopamine, which may lead to the development of more accurate disease models and enhanced small molecule screens for ventral midbrain specific disorders such as including Parkinson's disease.

For more on the enhanced generation of ventral midbrain neurons and all the new cell therapies aimed at treating devastating neural disorders, stay tuned to the Stem Cells Portal! 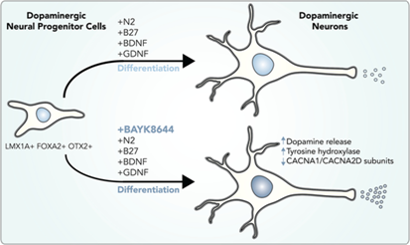