How Metabolism Impacts the Maturity of iPSC-derived Endothelial Cells

The characterization of endothelial cells derived from human induced pluripotent stem cells (hiPSC‐ECs) has provided evidence for the recapitulation of many critical physiological functions; however, the absence of the formation of Weibel-Palade bodies (WPBs), endothelial cell-specific secretory organelles that contain von Willebrand factor (VWF) and a variety of other proteins that contribute to inflammation, angiogenesis, and tissue repair, suggest that these cells are not functionally mature [1, 2].

Extensive research has discovered that exposure to shear stress [3], the expression of the transcription factor Krüppel‐like factor 2 (KLF2) [4], and interactions with pericytes [5] can all contribute to endothelial cell activity or maturation, and recently, researchers led by Ton J. Rabelink (Leiden University Medical Center, Leiden, The Netherlands) explored the influence of these factors on WPB formation of hiPSC‐ECs. However, in their new STEM CELLS Translational Medicine article [6], Tiemeier et al. now report that an unwanted metabolic profile and an associated elevated intracellular pH level inhibits the formation of WPBs in hiPSC‐ECs and that lowering the pH can induce hiPSC‐EC maturation and enhance their regenerative potential.

The authors employed multiple hiPSC lines to establish a generalized lack of VWF and WPB formation in differentiated ECs, thereby suggesting cellular immaturity and, hence, a reduced therapeutic potential. Unexpectedly, shear stress, pericyte coculture, and KLF2 expression all failed to induce the maturity of hiPSC‐ECs, which led the authors to instead study a role for pH, as pH can control the dimerization/multimerization of VWF and hence influence WPB formation [7]. Fascinatingly, lowering the intracellular pH of hiPSC‐ECs with acetic acid promoted the tubulation of VWF and the formation of elongated WPBs, suggesting that high intracellular pH lies behind the immaturity of hiPSC-ECs.

But what causes the unwanted high intracellular pH in hiPSC-ECs that hampers their therapeutic translation? Fascinatingly, the authors discovered that decreased intracellular lactate concentrations due to decreased glycolytic flux toward pyruvate and lactate fostered the high-pH intracellular microenvironment in hiPSC‐ECs. Furthermore, the decreased expression of monocarboxylate transporter member 1, a member of the solute carrier family (SLC16A1) that regulates lactate and H+ uptake, also significantly contributed to the high intracellular pH and lack of maturity of hiPSC‐ECs.

In summary, this fascinating study suggests that the inappropriate metabolic profile of hiPSC-ECs causes the elevated intracellular pH that inhibits the formation of mature WPBs. For more on the vital role of metabolism on cell function and the development of protocols for the generation of therapeutically-relevant endothelial cells from hiPSCs, stay tuned to the Stem Cells Portal. 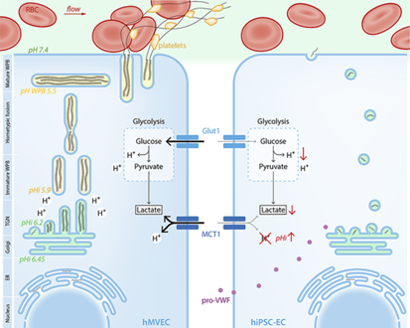