Review of “GARP is a key molecule for mesenchymal stromal cell responses to TGF‐β and fundamental to control mitochondrial ROS levels” from STEM CELLS Translational Medicine by Stuart P. Atkinson

Recently, a team of researchers led by Per Anderson (Hospital Universitario Virgen de las Nieves, Granada, Spain) and Francisco Martin (University of Granada, Spain) reported in a STEM CELLS article that the glycoprotein A repetitions predominant (GARP) type I transmembrane protein [1, 2] binds to the latency‐associated peptide (LAP)/transforming growth factor (TGF)‐β1 complex on the surface of murine adipose-derived MSCs to regulate TGF‐β activation and their immunomodulatory capacity [3]. Furthermore, this study established that GARP silencing prompted a decrease in MSC proliferation, leading the authors to investigate the mechanisms involved and whether GARP overexpression could promote MSC proliferation and survival during long-term culture.

Their new findings, published recently in STEM CELLS Translational Medicine, now suggest that GARP-mediated regulation of TGF‐β activation/signaling can allow MSCs to safely proliferate under stress-inducing conditions, such as those occurring during extended in vitro culture periods [4].

Next, turning to evaluate GARP overexpression, the authors found that GARP mediated an increase in MSC proliferation and imbued them with increased resistance to DNA damage and apoptosis. However, GARP overexpression also led to an increase in TGF‐β activation when compared to control MSCs, suggesting that both the presence and absence of GARP give rise to TGF‐β responses with diametrically opposing effects on MSCs.

The authors believe that, in the absence of GARP, TGF‐β is secreted, targeted to the extracellular matrix, and activated, while the overexpression of GARP leads to TGF‐β activation at the cell surface in a cell‐cell contact‐dependent manner. They hope to fully decipher this mechanism in future research and delineate any potential roles for the three TGF‐β isoforms (TGF‐β1‐3), which bind to the same receptors but exhibit distinct functions in vivo due to their different tissue distributions and expression levels [7].

To find out more about how GARP overexpression in adipose-derived MSCs may permit for their safe expansion and effective use in regenerative therapies, stay tuned to the Stem Cells Portal! 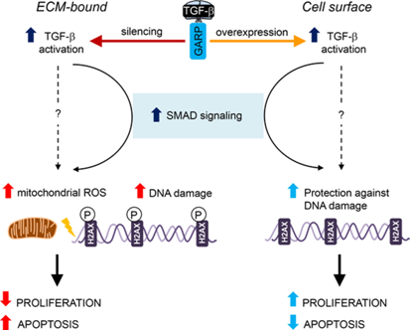