Exploring the Role of IGF1-IGFBP Interactions in Retinal Organoid Formation

A previous STEM CELLS article from researchers led by Majlinda Lako (Newcastle University, Newcastle upon Tyne, UK) reported on the crucial role of Insulin‐like growth factor 1 (IGF1) signaling in the differentiation of human embryonic stem cells (ESCs) into laminated retinal tissues [1]. The IGF‐binding proteins (IGFBPs) act as fine-tuners of IGF1 signaling at the local and global level [2-4] and researchers from the Lako group next explored their role in the development of the human retina by evaluating their function in response to IGF1 exposure in human ESC‐derived retinal organoid formation. As reported in their recent STEM CELLS study [5], Zerti et al. now provide evidence that the IGFBPs enable the role of IGF1 in retinal lamination and photoreceptor development in a stage‐specific manner.

While IGF1 supplementation facilitated the generation of retinal organoids possessing a typical laminated structure and mature photoreceptors, the absence of IGF1 inhibited the formation of laminated structures during early differentiation, reduced the number of photoreceptors, and increased the number of retinal ganglion cells at later stages of differentiation. The authors then attempted to generate organoids in the presence of IGF1 and an IGBP inhibitor that displaces biologically active IGF1 from any IGFBPs [6, 7]. Interestingly, blocking the IGF1-IGBP interaction prompted a lack of early retinal lamination, an increased propensity to generate interneuronal cells at intermediate stages of differentiation, and a decrease in photoreceptor development at later stages. Of note, a lack of IGF1 displayed more potent inhibitory effects on retinal differentiation than that observed for the IGBP inhibitor.

For more on how IGFs and IGFBPs mediate the development of retinal organoids from ESCs, stay tuned to the Stem Cells Portal! 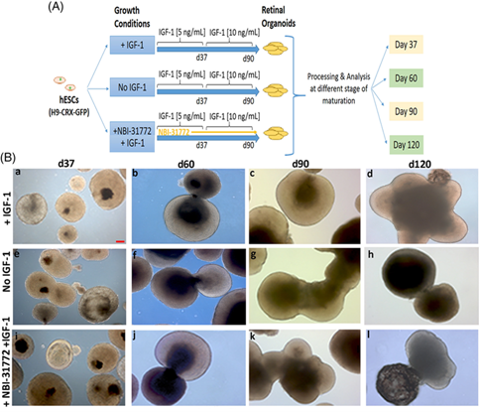