The central promise of human induced pluripotent stem cell (iPSC)-based therapies is the lack of immune response; however, the complexities faced when using humanized mouse models have limited any wide-ranging evaluations of immunogenicity. A previous study using bone-marrow, liver, thymus-humanized (Hu-BLT) mice reported the immunogenic nature of some autologous hiPSC‐derived cells [1] – in this case, smooth muscle cells raised an immune response, although retinal pigment epithelial cells did not. However, this study only assessed autologous T cell infiltration and not the actual survival of the graft.

The authors note that these findings provide evidence for the prediction of immunogenicity of cells by means other than human immune cell infiltration in skeletal muscle and the therapeutic application of usage of hiPSC‐derived myogenic progenitor cells.

For more on the immunogenicity of human iPSC-derived cells and the consequences for their therapeutic application, stay tuned to the Stem Cells Portal! 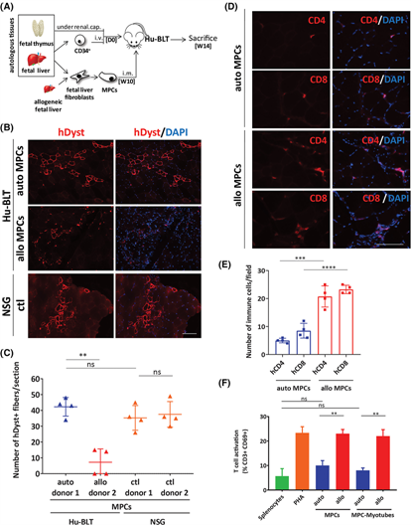